Lloyd (Buddy) Franklin Jones, 87, of Tuscaloosa passed away on August 29, 2019, at Hospice of West Alabama.

Born in Forest, Mississippi on Feb. 3, 1932 to Loyd and Claude Jones, Lloyd’s family moved to Demopolis in his final year of high school. It is there he met his future wife, Anne Pace. Lloyd was a graduate of the University of Alabama business school, a member Lambda Chi Alpha fraternity, and also served in the U.S. 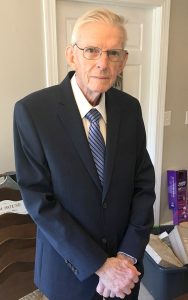 Army. Lloyd married Anne Pace in 1954, and they celebrated their 65th wedding anniversary just prior to Anne’s passing in July of this year. He spent the majority of his career as the dealer/operator of Loyd Jones Chevrolet and Oldsmobile.  Founded by his father, the dealership was in operation for 30 years, anchoring the east end of old downtown Demopolis. In retirement, Lloyd generously gave back to the community by volunteering his time to the Demopolis Food Pantry, BWWMH and other organizations.

Lloyd was preceded in death by his parents and wife, as well as his sister, Joyce Haygood.

He is survived by his sister, Anne Fleming; sons, David (Michele), Mike (Amy); and his grandchildren, Preston (Laura), Chris, Matt and Emmi. Funeral services will be held at the First Methodist Church of Demopolis on Wednesday, Sept. 4. Visitation will begin at 10 a.m. and the service will commence at 11 a.m.