Rebecca Ann Duckworth, 87, of Demopolis passed away peacefully on September 29, 2019.

She was born in Woodstock, Alabama to the late Eugene and Mary Harpe, on August 25, 1932. She is preceded in her death by her late husband Clarence Duckworth and her sister Betty Jean Pearce. 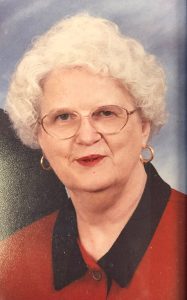 She grew up in various cities around the state of Alabama including Verbena, Thomaston and Auburn where she graduated from Auburn High School in 1950. After high school she attended Alabama Polytechnic Institute (Auburn University). After earning her degree from Auburn with a Bachelor of Science in Education she accepted a position with the Clay County School system in Ashland, AL where she met her husband of 58 years, the late Clarence Duckworth. She and Clarence moved to Vredenburgh, AL in 1964 where they lived for over 53 years. When she first moved to Vredenburg she briefly taught school in Beatrice and Pine Apple, AL. She also held an administrative position with Wilmon Timberlands. Her favorite job though was home maker helping support and take care of her family. She loved her Church, the United Methodist Church in Camden, and was an active member of the United Methodist Woman. In addition, she really enjoyed everything Auburn especially Auburn Football. While being a homemaker she also enjoyed cooking and especially preparing and saving the vegetables her husband grew in his garden. Her green beans were famous for being so great. She believed in hard work and was very humble. She loved her family and was a devoted mother and wife.

Her life was a living example of the Bible verse, Ephesians 4:32 – “And be kind and co passionate to one another, forgiving one another, just as God also forgave you in Christ.”

Ann is survived by her sons, Marty Duckworth, of Demopolis AL, Scott Duckworth of Raleigh,

Please join us in celebrating her life on Thursday, Oct. 3 at Camden United Methodist Church.

Visitation at 10 a.m. followed by a service at 11 a.m. Those who knew and loved Ann are welcome to join.

In lieu of flowers donations can be made to Alzheimer’s Association, Hospice of West Alabama or the Camden United Methodist church in her name.