Browder has been a part of Demopolis schools for 20 years, joining the system in 2000. Most recently, Browder has served students as a history teacher and was the assistant head coach for the football team. 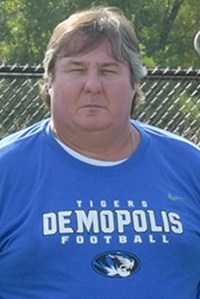 “He had a laid-back attitude but was competitive. He always had the best interest of the players and other coaches at heart. There will be a big void on our team and it’s going to take time for our players and coaches to get over not having him at practices and on the sideline,” said DHS Head Football Coach Brian Seymore.

Along with serving as assistant head coach, Browder specialized in leading the runningbacks.

“He was a guy I could bounce ideas of off and he would tell me truth, good or bad. I valued and respected his opinions. He took a lot of pride in coaching our runningbacks and he’s coached a lot of tremendous athletes over the years,” Seymore said.

Browder passed during a surgical procedure.

“It is shocking. He was looking forward to recovering and getting back with the team to prepare for the next season. It’s hard to swallow. I take comfort in knowing he had a strong relationship with Christ. He was a tremendous teacher and coach and he will missed by a lot of people,” Seymore said.

Browder was also popular with students of his history classes and has been recognized with the DHS Teacher of the Year Award.

“Coach Browder has had a tremendous impact on many DHS students over the years and will be missed dearly. The board and I are praying for his wife and family; praying that God gives them strength during this most difficult time,” said Demopolis City Schools Superintendent Kyle Kallhoff.

Browder was a 1990 graduate of Livingston University and the University of West Alabama where he earned a bachelor’s degree in English and a master’s degree in the Art of Teaching History. He taught Advanced Placement U.S. History, Pre-Ap U.S. History and was an adjunct instructor for the UWA-DHS Duel Enrollment program.

He is survived by his wife, Kim, who also is a teacher at DHS, and a son, Skyler.

Visitation is planned for Wednesday, June 10, 5-7 p.m., at Kirk Funeral Homes Chapel in Demopolis. A graveside service will be held Thursday, June 11, 2 p.m., at the Henegan Cemetery in Epes, Alabama. (Full obituary link is below.)