Linden blows out Brantley on road 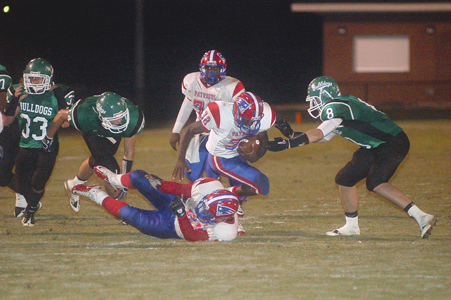 BRANTLEY — If Linden was looking to make a statement heading into the playoffs, the Patriots certainly did with a 42-7 rout of reigning Class 1A state champion Brantley.

“We wanted to finish the regular season on a high note, and we knew we had to step up our game,” said head coach Andro Williams.

It didn’t take long for the Patriots to get on the board as quarterback Anthony Robinson, Jr. hit Gerald Bruno for a 21-yard touchdown pass less than three minutes into the game.

With 5:35 left in the first quarter, Kendarius Fritts made the lead 12-0 with a three-yard run.

The Bulldogs showed signs of life early in the second quarter when quarterback Justus Harvey hit Chester Person for a 70-yard touchdown pass to cut the lead to 12-7.

However, the Patriots quickly returned the favor.

Three plays into the next drive, Fritts broke a 47-yard run to crack the game open.

Before the quarter was over, Robinson added an 12-yard touchdown run to make the margin 27-7 at halftime.

Despite a pair of turnovers, the second half was all Patriots.

Julian Little scored on a 19-yard run in the third quarter and Linden’s defense also came up with a 55-yard pick-six by Demetrius Craig to seal the game.

“I’m really pleased with our kids,” said Williams. “We’ve got some things that we’ve got to correct before next week, but I like where we are. We’ve got to continue to work going into the playoffs.”

Robinson finished the night 6-for-10 through the air for 150 yards and two touchdowns while adding 35 yards on the ground and another score. He also registered two interceptions from his cornerback spot.

Fritts had 190 yards and two touchdowns on 15 carries.

The Patriots play host to Kinston next week in the first round of the playoffs.