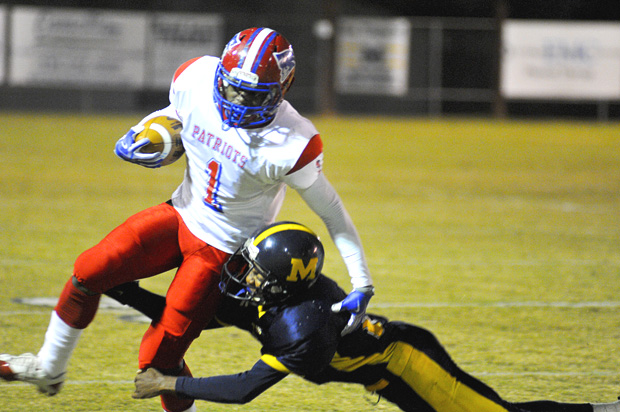 LINDEN — The Patriots remember well what happened this time last season. They were riding high as they approached a third round date with Brantley. An athletic team that was unbeaten and had scarcely allowed a point, it was supposed to be Linden’s year.

Whether it was the pressure of the moment or the prospect of meeting Sweet Water in the semi-finals no one can really say. But the Patriots stumbled at home in that third round matchup. That is a scenario Andro Williams hopes his team does not repeat this season.

“I think we’re a little bit further along as a team mentally,” the Linden head coach said of how far his team has come in the 12 months since that loss. “Our leaders are carrying us.”

Williams indicated his confidence in his team’s growth was underscored last week when it faced adversity on the road against McKenzie.

“I thought we got some things last week that we might not have handled as well two or three years ago,” he said.

That mental strength will likely be put to the test again as this year’s third round task will likely be no easier as Brent Hubbert brings his Maplesville team to call Friday night. The last time those two teams met, the environment on the field and in the stands got a little more intense than usual. This year may tell a similar story on the field if Williams’ assessment of the Red Devils is accurate.

“They look like Maplesville,” Williams said. “Always going to be well-coached. They are one of the bigger Maplesville teams we’ve seen. They are big, physical, strong.”

Williams said the Red Devils will challenge his team up front on both sides of the ball and proclaimed the struggle in the trenches as the battle that will determine the outcome of the game.

“We’re going to have to have our best blocking game up front,” Williams said. “We’ve got to be able to do that in order to beat them.”

In addition to the physical challenge, the Patriots anticipate intellectual obstacles from a Maplesville team that has shown a penchant for mixing its schemes and rolling out new plays and formations during its biggest games.

“Last year we walked into this game and we got slapped in the face early with some things we hadn’t seen,” Williams said of his team’s 2009 contest against Maplesville. “We’re going to have to be ready to make some adjustments early.”

The stage is just as big as it was a year ago and the opponent, which was ranked No. 1 in Class 1A in the final Alabama Sports Writers Association poll of the season, is just as good. Then there is the looming potential of a fourth round date with Sweet Water. But Williams believes none of that really matters to his team. He said Maplesville is the only thing on Patriot minds this week.

“I think we’re pretty focused,” Williams said. “We know who they are.”