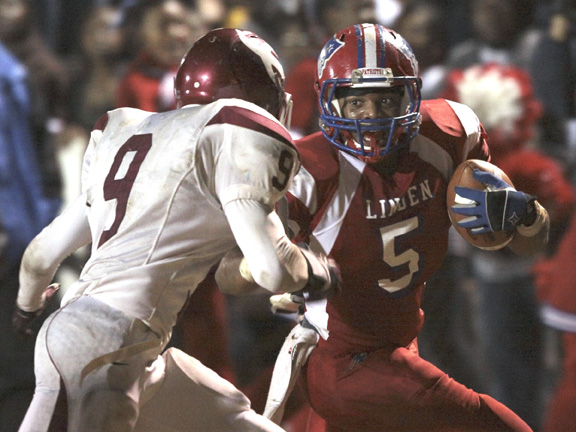 LINDEN — The Patriots asserted themselves early and often Friday night while demoralizing one of the top teams in Class 1A with a 45-13 win. The victory sends Linden to the semi-finals of the state playoffs to meet up with familiar foe Sweet Water next week.

“We’re blessed to be in the position we’re in,” Linden head coach Andro Williams said.

That blessing was helped along in part Friday night by the play of sophomore Anthony Robinson.

The Linden quarterback hooked up with Terris Lewis for a 46-yard pass play on the Pats’ first play from scrimmage before finishing the drive himself with a touchdown run to put LHS up 7-0.

Robinson later recorded his first of two interceptions on the night to set up another scoring drive, a possession he punctuated with a 17-yard touchdown pass to Gerald Bruno to stretch the lead to 13-0.

Maplesville appeared poised to make a game of it with 15 seconds to go in the first half when it sniffed out a bubble screen a returned the ball 50 yards deep into Linden territory. However, a roughing the passer call negated the play and returned possession to Linden.

The Pats capitalized when Robinson threw a jump ball to Najee Bright for a 28-yard touchdown pass with 0.3 seconds remaining on the second quarter clock. The catch sent LHS to the locker room with a 19-0 lead.

Linden wasted little time adding to the advantage in the second half, marching 65 yards on seven plays to open the third quarter. Kendarius Fritts bolted for a 28-yard touchdown run to cap the drive and push the lead to 25-0.

After Maplesville got on the board early in the fourth quarter, Linden answered again with a Fritts touchdown run, capping a five-play, 78-yard drive that featured 70 yards on the ground for the Patriot back and moved the score to 31-7.

Fritts added a third touchdown run from 26 yards out later in the quarter.

Robinson topped off the scoring with a screen pass to Shauka Reese that went for a 30-yard touchdown.

Robinson finished the night 15-for-25 for 203 yards and three touchdowns through the air to go along with his rushing score and two defensive interceptions. Fritts amassed 244 yards and three scores on 28 carries.

Little, Randy Jackson and Jalen Lewis recovered fumbles while Lewis and Bright each intercepted a pass to contribute to the seven Red Devil turnovers in the game.

Linden rushed for 287 yards on 39 carries, compiling 490 yards of total offense. Conversely, Linden held Maplesville to 73 yards on the ground and 182 through the air.

“We’re back here because we did learn from (the first game against Sweet Water),” Williams said before commending his team’s effort. “Our kids continued to play hard. That’s the main thing we’re proud of. I thought we played well as a whole.”