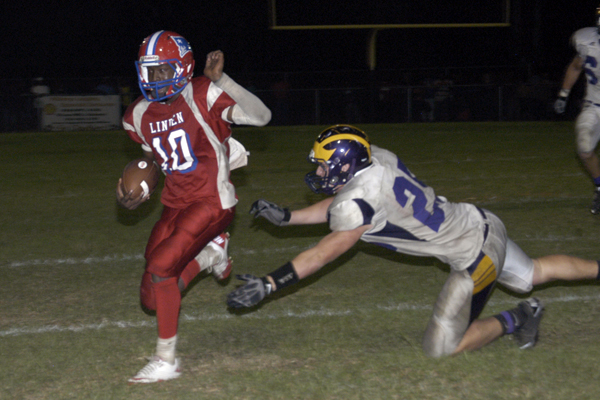 DIXON’S MILLS — Linden (4-0, 3-0) used a suffocating defense and a capable stable of running backs to beat Sweet Water (2-2, 1-1) 25-14 Friday night. The win, which was sealed by an Anthony Bates sack of Brett Davis on fourth down with a minute to play, marked the first time Linden defeated Sweet Water since Sept. 21, 2001.

Following the game, Linden head coach Andro Williams acknowledged the victory could help to get the monkey off the backs of Patriot fans.

“The hump is about our community and our fans,” Williams said when asked if the win got his team over the hump against Sweet Water. “This is not a hump for our football team. Our goals are one game at a time and to win our region.”

“It’s just another game for me,” Linden quarterback and safety Anthony Robinson said. “We just like to play football. With all the commotion about the field, we just wanted to play football.”

Linden carried a 19-7 lead into the locker room, but scuffled on its first possession of the second half before Sweet Water’s Trayun Jones blocked a punt to set the Bulldogs up at midfield.

Sweet Water proceeded to march the ball down the field, using 10 plays to lean on the Linden defense and eat up game clock. On 4th and goal from the one yard line, the Bulldogs coughed the ball up. Robinson came in from his safety position to recover the ball and set Linden up in the shadow of its own goal post.

On the next play, Robinson took the snap in his own end zone and avoided a string of tackles and a potential safety to get the ball back to his own two before being injured at the bottom of a pile at the end of the play.

The Patriot drive lasted all of one play without him in the game as Sweet Water recovered a fumble at the Linden 13 to put its offense back on the field. The Bulldogs used an illegal participation penalty and four run plays to cut the lead to one score when Michael Thompson punched the ball in from two yards out. Harrison Lewis added the extra point to cut the deficit to 19-14.

Linden responded quickly when Marquis Shelton broke free on a 36-yard touchdown run on the second play of the fourth quarter.

“They beat us on the edges,” Sweet Water head coach Stacy Luker said. “We have to be better on the edges, both sides.”

“We felt like the speed sweep was something we were going to be able to lay our hats on,” Williams admitted.

The teams traded blows for the remainder of the fourth quarter with the best scoring opportunity coming when Shelton shook loose for a 46-yard run down to the Sweet Water 2.

Sweet Water’s last ditch effort started with three minutes to go in the game and advanced only 15 yards by virtue of a personal foul penalty.

Linden opened the scoring on its first possession of the game when it covered 62 yards on six plays, capping the drive with a 24-yard touchdown run by Jamal Lewis.

After forcing its second three-and-out of the first quarter, Linden scored again when Robinson hit Shelton on a 64-yard pass to move the ball to set up a 32-yard touchdown run by Lewis.

Sweet Water then embarked on a 17-play drive that covered 70 yards and chewed more than nine minutes off the game clock. The Bulldogs finally punched the ball in on a one-yard touchdown run by Thompson.

Robinson proceeded to hit Shelton on a 39-yard pass to set up an 8-yard touchdown run by Julian Little.

“We wanted the ball in his hands in the second half,” Williams said of Shelton, who ended the night with 152 yards on nine carries and 103 yards on two receptions. “We wanted him to have a chance to be the best football player on the field tonight.”

While the offense put up respectable numbers for the Patriots, the defense set the tone from the outset, holding Sweet Water’s leading rusher to 63 yards on 24 carries.

“He is a good runner,” Linden linebacker Terris Lewis, who had 16 tackles in the game, said. “He is physical. We knew when we made contact, we had to wrap up and hang on.”

“I’m real proud of our entire defense,” Williams said. “They were up for the challenge tonight.”

The loss was the first Class 1A regular season setback for the Bulldogs since a 41-40 defeat at the hands of American Christian in 2005.

“It was their night,” Luker said of Linden. “We’re building for November.”

Sweet Water will play again next week on the road at Handley while Linden hosts Greene County in Dixon’s Mills.