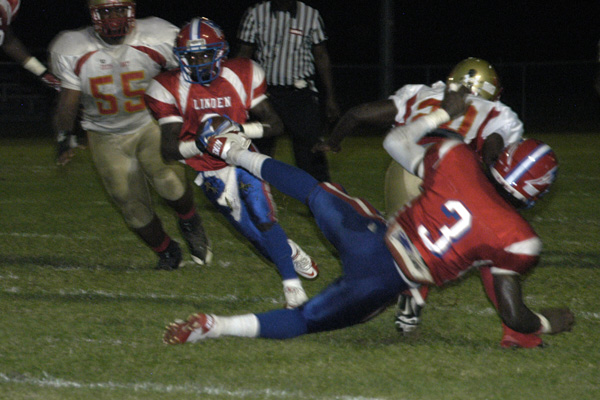 The Linden offense sat squarely on the shoulders of junior quarterback Anthony Robinson, who accounted for five of the Patriots’ touchdowns, all night.

The Greene County Tigers opened the game by fumbling their first offensive snap away.

Terris Lewis pounced on the loose ball, setting the Patriots up on the Tigers’ 30.

Linden wasted no time taking an early lead when Robinson hit Lewis in the back of the endzone for a 15 yard strike.

On Greene County’s next series, Lewis flexed his defensive muscle by stepping in front of a Tigers’ pass and pointed Robinson and his offense toward the endzone from the 39 yardline.

Robinson capped the brief drive with a 3 yard run for the score, giving the Patriots a 13-0 lead.

Greene County took the ball and mounted their first promising drive of the game, but it was halted when Eric Monroe jumped on a Tiger fumble.

The Tigers clawed back late in the first and mounted a 25 yard scoring strike to cut the Linden lead, 13-8.

Robinson and his offensive unit continued to pick apart the Tiger defense into the second. The junior gunslinger gave Linden a 21-8 lead on a 4 yard touchdown run on the second play of the second quarter and hooked back up with Terris Lewis on a 13 yard toss 5 minutes later.

With just more than a minute left in the half, Jamal Lewis snagged his first interception of the game to give Linden another crack at expanding its lead.

Robinson wasted little time in finding junior receiver Jalen Lewis on a 30 yard touchdown bomb, giving Linden the 33-8 edge at the half.

In the first 24 minutes of play, Robinson accounted for 186 yards and five touchdowns.

The Patriots opened the second half by punting out of their own endzone. On the next play, Jalen Lewis got his second pick of the game but the Patriots fumbled their fortune away on the following snap.

On the second play of the fourth, Jamal Lewis found the endzone from 4 yards out, giving Linden a 39-8 lead.

Jalen Lewis sealed the win with his third interception of the night in the Greene County endzone with 6 minutes left to play.

Robinson finished the night with 149 yards passing, 67 yards rushing and five scores. Robinson spread the ball around in the air to Terris Lewis (80 yards and two scores) and Jalen Lewis (57 yards and a score).

Junior running back Marquise Shelton finished the night with 45 yards on 10 carries. Shelton sat out most of the second quarter with a bruised rib and played sparingly in the second half.