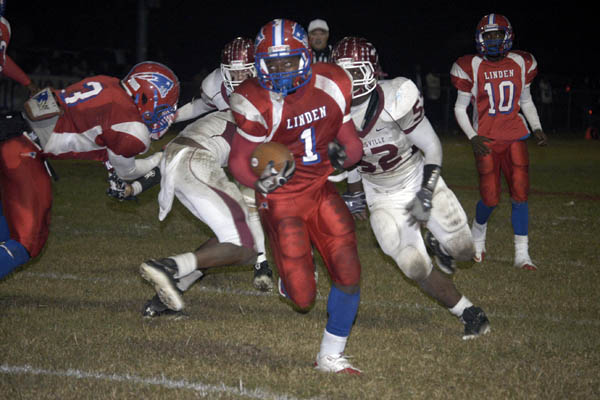 DIXON’S MILLS — Linden (13-1) will make its first ever trip to the Class 1A state title game Thursday after a 40-7 thrashing of rival Sweet Water Friday night.

“I’m tickled about the fact that our football team knows how to come together and deal with a different situation,” Linden head coach Andro Williams told his team following the win. “This is all about you advancing, being a better team and a better individual.”

Linden appeared in turmoil early as the Bulldogs’ took the opening possession and used 12 plays and a penalty to force two Patriot timeouts, suck more than seven minutes off the game clock and drive to the LHS 25 before turning the ball over on downs.

“We knew we were going to have to be able to weather the storm,” Williams said. “They had some things going for them early. Our guys made some adjustments early on.”

The teams traded punts before LHS quarterback Anthony Robinson announced his presence early in the second quarter with a 32-yard touchdown run around the left side. Ryan Preston added the point-after kick to put LHS up 7-0.

Just under seven minutes later, Robinson struck again when he darted up from his free safety spot, plucked a Sweet Water fumble off the ground and returned it 32 yards for a score. Preston missed the point after but drew a roughing penalty to get another shot at the bonus kick, nailing the second chance to stretch the lead to 14-0.

Sweet Water used 12 plays to move the ball down to the Linden 10 to set up a field goal opportunity with 4.5 seconds to go in the half. Marquis Shelton bolted around the right side of the Sweet Water line and blocked the effort before picking up the ball. With all of the players on the field stopped and the whistle not yet having been blown, Robinson once again emerged the hero when he took the ball from Shelton’s arms and tore down the sideline 89 yards for his third touchdown of the quarter, putting Linden up 20-0 as time expired in the half.

“I’m glad he is on my team,” Williams said of Robinson.

The Patriots scored again on their opening drive of the second half, going 65 yards on six plays and capping it with a 21-yard touchdown run by Julian Little. The failed point after left LHS up 26-0.

Linden scored again with 46.2 seconds remaining in the third quarter when Robinson hooked up with Shelton for a 77-yard touchdown pass.

Linden then forced a three-and-out on the ensuing possession, punctuating the stand when Preston drug down the Sweet Water punter at his own 5. One play later, Little crossed the goal line for the final Patriot touchdown. Preston’s kick put LHS up 40-0.

Sweet Water got its lone score three plays later when Michael Thompson scored on a 35-yard touchdown run. Taylor Wilson scored the final point of the Sweet Water season with the bonus kick.

“At the end of the day, we’re not as good as is probably advertised, but they don’t know it,” Williams said of his players.

Thompson led all rushers with 153 yards on 25 carries. Jamal Lewis had 73 yards on 11 carries for the Patriots.

Terris Lewis led the defensive unit with 15 tackles. Preston added none stops, three of which were for a loss, and recovered a fumble in the game. Kevan Rembert had 12 total tackles while Chris Rogers finished with eight.

Linden will play in the state title game Thursday at 3 p.m. in Bryant-Denny Stadium in Tuscaloosa against Marion County.