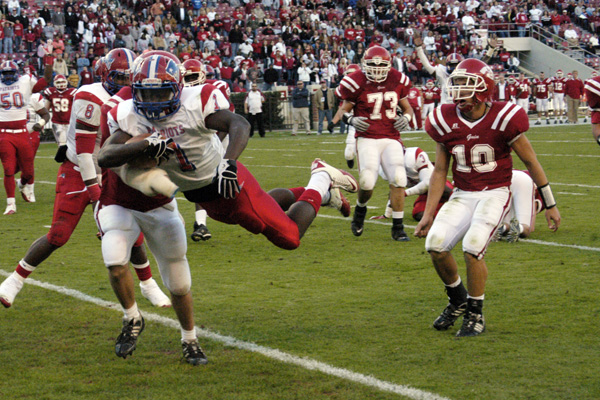 TUSCALOOSA — Linden woke up from its dream season Thursday as a barrage of penalties and Marion County’s vaunted rushing attack equaled a 23-12 Patriot loss in the Class 1A state championship game.

Marion County threw the first blow of the game, when Sean Wallace found Ready Swanigan for a 15-yard score on the final play of the first quarter. The play capped a six-play, 79-yard drive that was highlighted by a 49-yard run from Wallace, the game’s eventual MVP.

“We knew that there was possibly going to be some issues with the midline option,” Linden head coach Andro Williams said of unique offensive look from Marion County that proved to plague his Patriots throughout the afternoon.

Linden wasted little time responding when Marquis Shelton opened the second quarter by returning the MCHS kickoff 69 yards to the Red Raider 7. On the ensuing snap, Julian Little took the handoff, dashed around the left side and dove over goal line to tie the game.

The teams proceeded to trade possessions until Swanigan picked off an errant Patriot pass and returned it to the Linden 37. That set up an eight-play, 19-yard drive that ended in a 35-yard field goal from Ben Riggs to put the Red Raiders up 9-6.

Linden again needed little time to answer as Shelton returned the ensuing kickoff to the Patriot 45. Anthony Robinson then weaved his way through the MCHS defense to go 55 yards and put Linden up 12-9.

The turning point in the game came on the following drive when Linden held Marion County to a 29-yard field goal that would have left the game tied at 12 were it not for a roughing the kicker penalty that moved MCHS to the five yard line with four chances to take the lead. After a false start penalty backed his team up, Wallace put Marion County on top to stay with a six-yard touchdown run. Riggs’ kick left MCHS up 16-12.

Linden came out hot in the second half when Little scampered through, around and past the Red Raider defense for a 68-yard touchdown run. But a holding penalty against the Patriots negated the play. MCHS linebacker Justin Sanderson then dropped into coverage and plucked a Patriot pass to set up a four-play, 30-yard drive that ended in a one-yard Wallace touchdown run.

Linden’s last true chance came when Robinson hooked up with Terris Lewis on a 47-yard gain that took Linden to the Marion 47. Linden pushed as far as the MCHS 20 before turning the ball over on downs and allowing the Red Raiders to run out the clock.

“I was proud of our effort to get to this point,” Williams said. “Hats off to Marion County. They did a real good job with their scheme and their plan.”

Linden ended the night with 12 penalties for 92 yards.

“We’ve actually done a real good job down the stretch getting away from penalties,” Williams said of his team.

“I will make a comment that we will be back,” Robinson, a junior, said following the game. “We’re going to work hard and try our best to be back. We’re going to start Monday and work hard.”

Robinson finished with 12 tackles on the night while also passing for 112 yards and running for 53.

Lewis added 11 stops and forced a fumble while catching three passes for 71 yards in the final game of his high school career. Jalen Lewis recorded seven tackles and had two interceptions in the game.