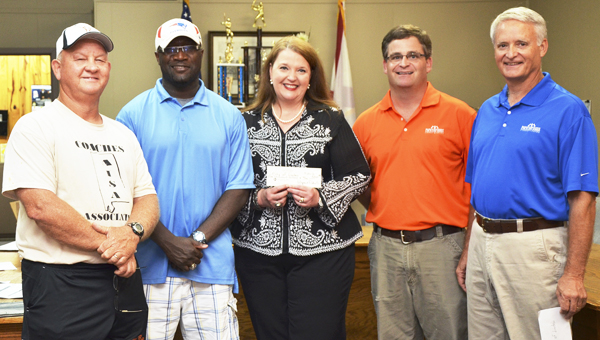 As they have done for several decades, the Linden High School and Marengo Academy football teams will share the use of the Linden Athletic Field for all of their home games in the upcoming 2012 season.

Between the two varsity football teams, 10 regular season games will be played on the Linden Athletic Field, lighting up Linden every week on game night.

Marengo Academy head coach Robby James and Linden head coach Andro Williams have worked together to schedule their varsity teams’ games on the shared Linden Athletic Field for as long as they have been in their current coaching positions. James has been at MA for three years, and Williams has been at LHS for the past five years, but this is the first year they have been required to submit their final schedules to the City of Linden. This requirement is a result of the fact that the city now owns and manages the Linden Athletic Field.

After talking to James and Williams to verify that their game schedules were complete, Mayor Mitzi Gates requested that the two coaches meet with her on Monday, July 30, to review the schedules and to discuss the progress that is underway at the field in preparation for the quickly approaching 2012 season. The coaches agreed to the requested 1 p.m. meeting, having no idea that Gates’ real reason for calling the meeting had very little to do with reviewing schedules and much more to do with a surprise announcement from a local merchant.

“Carter Echols called me a week or so ago,” Gates said, “and he said that he had heard that the fee for the use of the field on varsity game nights would be $400, and he wanted to know if that was, in fact, accurate. I told him it was, and the thought ran through my mind that Papa’s Foods might want to cover the cost of each team’s first home game of 2012 as a way of showing their support of the two schools’ recent signing of an agreement with the city.”

Gates said she was close in interpreting the spirit of the phone call, but that she had underestimated the scope of Papa’s Foods’ generosity.

Gates explained that while Echols said Papa’s Foods didn’t want any special recognition from the city council or a public thank you, she insisted that he and Wynne Echols make the announcement in person to representatives from the schools. Both agreed and said if Gates would invite James and Williams to a meeting, they would be on hand to wish them all the best for the 2012 football season and to let them know that their regular season field fees had already been paid.

Gates was more than happy to oblige, and that is when she called the coaches to set up the “football schedule meeting” that unbeknownst to them would have a surprise ending thanks to the presence of the father and son Echols.

“We have a unique situation here in Linden with a shared football field,” Wynne Echols said, “and we appreciate the important part you play in making it work so that those boys you coach can do what they love to do and what this community loves to watch them do – play football. Seeing those Friday night lights means more than you might imagine to our town, and Papa’s Foods wants to help you with the expenses that we know are involved in fielding a team and lighting up Linden on game night. It is with great pleasure that we present this check to the city of Linden on your behalf. It’s our hope that this contribution toward paying your field fees will be a help to both the academic and athletic success of all of our students.”

Following the surprise announcement and the presentation of the check, the two coaches could only smile and shake their heads in disbelief as they offered thanks.

“Our reason for making this contribution to the City to benefit both the Longhorns and the Patriots is twofold,” Carter Echols said. “First and foremost, it’s all about the kids. This gift is also Papa’s Foods’ way of partnering with the City and every stakeholder in our schools in an effort to support not only our students and their teams but also, and most importantly, our town. Supporting Linden is a common goal we all share, and Papa’s is glad to be able to be a part of that.”

The LHS Patriots will play at home on Sept. 14 versus St. Luke’s; Sept. 27 versus Wilcox; Oct. 5 (homecoming) versus A.L. Johnson; Oct. 26 versus Fruitdale; and Nov. 2 versus Southern Choctaw.

The MA Longhorns will play at home on Aug. 31 versus Eastwood; Sept. 13 versus Patrician; Sept. 28 (homecoming) versus Meadowview; Oct. 12 versus Sparta; and Oct. 25 versus Southern.

Kick off time for these varsity games at the Linden Athletic Field is 7:00 p.m. Tickets may be purchased at the gate on game night. For season ticket information, call Margie Jones at Linden High School at 295-4287 or Tammy Freeman at Marengo Academy at 295-4151.