The Linden Patriots played host to the McIntosh Demons on Friday night in sub-regional basketball play.

The Patriots jumped out to an early 14-2 lead in the first quarter, and added to that lead throughout the game. At the end of the first, the Patriots had a 23-8 lead over the Demons.

In the second quarter, Linden added to that lead with a balanced scoring attack. The Patriots’ fast-paced attack was too much for the Demons to handle, and Linden went into the half with a 21-point lead, 39-18. 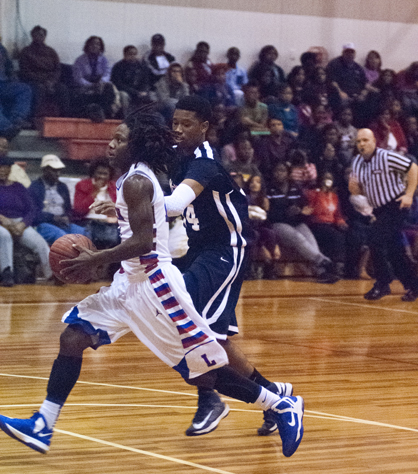 “We play different than most people,” head coach Roosevelt Moore said. “We try to stay in attack mode, and that’s what we did tonight.”

Linden continued adding to their lead in the third quarter, and took a commanding 27-point lead into the fourth quarter.

Roosevelt was able to empty his bench and play all of his players in the fourth while resting his starters for the region tournament that begins next week. McIntosh was not able to take advantage of Linden’s lack of experience in the court in the fourth quarter, and the Patriots coasted to a 71-45 win.

“I felt like we missed shots that we normally knock down early in the game,” Roosevelt said, “but our guys kept playing hard.”

Imoras Agee led the Patriots with 17 points. Shauka Reese added 15, Kynard Craig was able to hit double figures as well, with 12 points and Savon Parker had 8. Anthony Robinson Jr. finished with 4 points on the night.

The Patriots will play the winner of Geneva County and Brantley on Wednesday, Feb. 20 at 4:30 p.m. at the Dothan Civic Center.