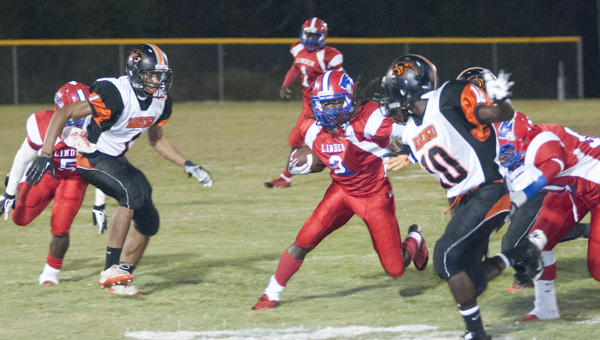 Linden junior Devontae Knox cuts through a hole in Linden’s 39-14 win over Marengo.

The Linden Patriots defense stifled the Marengo Panthers most of the night Thursday on their way to a 39-14 win to take control of the region as the regular season begins to wind down.

The Panthers are still in the playoff hunt, but they need to finish the season strong to earn a spot in the postseason.

“We knew coming in that this would be the tough part of our schedule,” Marengo head coach Drederick Bell said. “We’re still in the hunt. We have a young team that’s improving. We just have to learn to play from the get-go, and not worry about what name is on the other team’s jersey.”

Devontae Knox, Prentiss McCuiston and Terrance Sanders each had two touchdown runs for the Patriots in the win. Jatevin Horn had both of Marengo’s touchdown runs in the game. 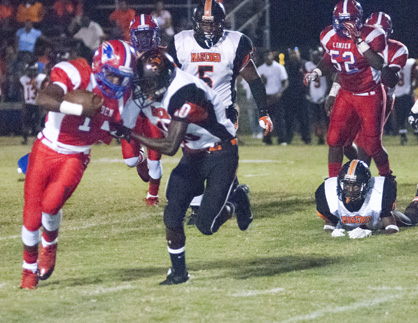 The Patriots took an early 7-0 lead on a 7-yard touchdown run by Sanders. After stopping the Panthers on their next drive, McCuiston scored his first TD of the game, also from seven yards out.

With 9:39 to play in the first half, McCuiston scored his second touchdown of the night on a six-yard carry to put Linden ahead 21-0.

Both teams went three-and-out on their next possessions, then with 4:27 to play in the half, Horn broke a 54-yard run for a touchdown to get the Panthers on the board. Marengo missed the two-point conversion, leaving the score at 21-6. 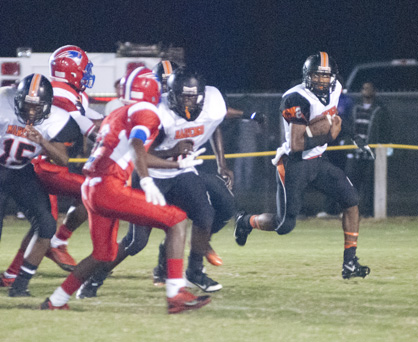 Linden added one more score before halftime on a 25-yard run by Knox. A bad snap on the extra point attempt resulted in a failed conversion, making the score 27-6.

Linden opened the scoring in the second half with 3:48 to play in the third quarter. Sanders reached the endzone from 10 yards out to put Linden on top 33-6.

A Linden fumble in the fourth quarter gave Marengo the ball at the Patriots 43 yard line, and later in the drive, Horn broke a 31-yard run for his second score of the night. Horn also converted the two-point conversion to make the score 33-14. 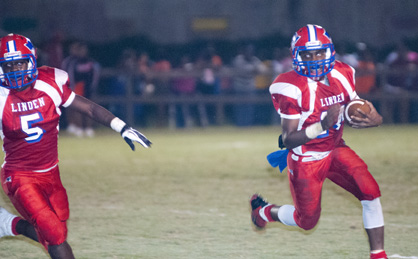 “We have to continue to get better,” Linden head coach Andro Williams said. “We have to keep jockeying for position as the season goes on. We’re still finding who we are, and we’re still learning. We’ve got to work in practice to find who we are.”