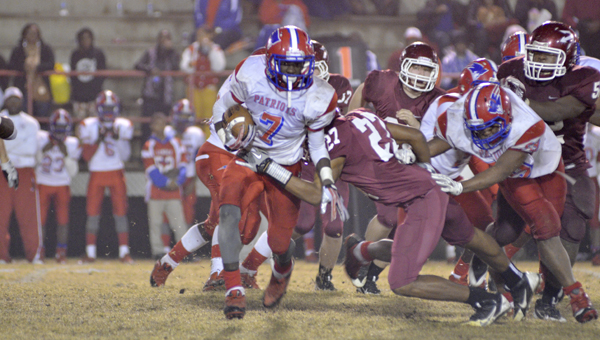 Dequan Charleston runs the ball against Maplesville. He would finish the night with 11 yards on 4 carries.

Maplesville’s defense played strong, holding Linden to just 65 yards of offense, all of that coming on the ground.

“They were the better team tonight, and they deserved to move on,” said Linden head coach Andro Williams. “I’m real proud of my guys and the effort they put in this season.”

The game stayed close through the first quarter but Maplesville then pulled away. The Red Devils amassed 253 yards on the ground and added another 104 yards through the air.

Quarterback Colby Chambers accounted for three of Maplesville’s five touchdowns. He ran two in from short yardage and also connected with Chase Girlie for a 14-yard score.

The Red Devils other two TDs came off a 5-yard run by Damian Mitchell and a 70-yard gash by Trevor Wallace that capped scoring for the night.

“I can’t say enough about their attitudes of coming to work and getting the job done,” said Maplesville head coach Brent Hubbert. “We knew our defense was capable of doing that —just reading keys, the discipline part of it, and doing the things they’ve done all year.”

Prentiss McCuiston led Linden in offense with 20 yards on the ground.

Linden finishes the season with a 9-4 record. Maplesville will face Brantley in next week’s semifinal.