Demopolis native Ray Williams made a name for himself at the Alabama Powerlifting State Championship on Saturday, Feb. 23 in Mobile. In only his second powerlifting competition, Williams, who weighs 361 pounds, set a new U.S. record for the raw 275-pound plus division with an 860-pound squat.

The Watoto Children’s Choir from Uganda made a stop at John Essex High School in March during their six-month tour of the United States. 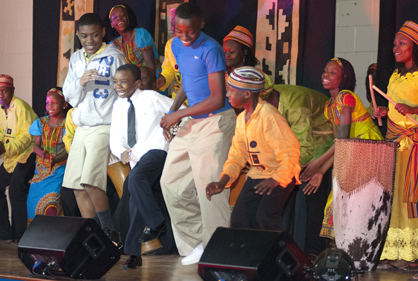 The show the choir performed is called “Beautiful Africa: A New Generation.”

Each of the children in the choir has suffered the loss of their parents, either through disease or war, and they now live in one of the Watoto childrens villages, which have a total occupancy of 2,700 children.

Former Demopolis Mayor Austin Caldwell passed away on Saturday, March 24 at DCH in Tuscaloosa. He was 86.

In February 2013, he was awarded the Lifetime Achievement award during the Chamber Celebration. Said the Rev. Art Luckie of the mayor from 1985-2004: “He was a gentleman. He was also a gentle man. He was a man of honesty integrity, character, faith and humility.”

Caldwell is heavily credited with building the city’s financial reserves. The SportsPlex and the Ravine in Demopolis were built during his tenure.

Hospital to keep Labor Unit, Whitfield CEO says there are no ‘short-term solutions’

“We are going to try to do everything we can to keep it open, while we contnue to work on mid-range and long-range solutions,” said hospital CEO Mike Marshall.

At a meeting earlier in April, Marshall stated that the hospital was losing $400,000 to $500,000 per year on labor and delivery. The losses stem from a higher percentage of births that are Medicaid or indigent care.

“It’s gotten harder and harder to support programs that have high Medicaid or indigent populations,” Marshall said. “(Concerning Medicaid), we get paid less than our cost providing the service.”

A Marengo County grand jury decided in June 2013 to not take the case to trial.

In a press release from the law firm of Gibbs & Sellers, Armstead said he had a $2,292 check for the cars mailed to Sheriff Richard Bates after they were weighed.

Demopolis High School student and football player, Cody Webb, lost his life May 10 on Highway 43 in a two-car accident involving a log truck.

Head football Coach Tom Causey reflected on Webbs’ character, “He was a Christian who spread his faith by his actions and the way he lived his life. He never saw adversity, he just only saw opportunity.”

One hundred forty-one students graduated on May 24, 2013.

Class president Sutton Aiken opened the ceremony with a prayer. Followed by the salutatory speech by Alexis Jones, in which she reflected on the groups’ road to graduation.

Jones also won both the Dr. James I. Bell award, given to a female student based on character and leadership, and the Balfour Award, which is based on scholarship, achievement and loyalty.

The Tommy Brooker Award, given to a male based on character and leadership, went to Brock Montgomery.

The “I Dare You” award, given to both a male and female student, went to Aiken and Tucker Jones.

Valedictorian Chance Martin also reflected on the class’s journey from Westside through graduation in his valedictorian speech, “We will never forget our most interesting teachers,” he said. “We feel that we are old and wise but we still have so much ahead of us. We all want to achieve excellence.”

The Demopolis Police Department arrested 10 Greensboro individuals the last week in May in an alleged counterfeit check scam. According to authorities, the Demopolis Walmart filed a complaint after the fake checks were cashed. The suspects allegedly would present forged State of Alabama checks at Walmart to be cashed. The checks weren’t real but rather printed off a home printer.