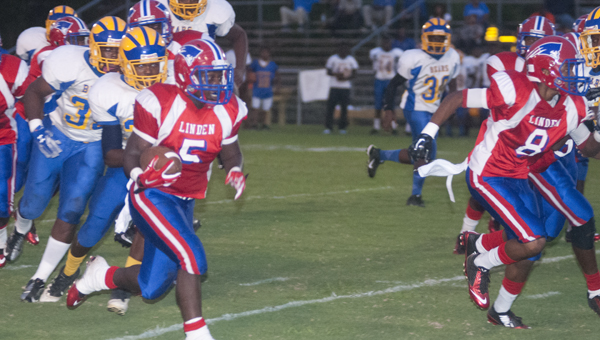 Prentiss McCuiston takes a run to the outside for Linden against Keith on Thursday. McCuiston led the way for Linden with 110 yards and two touchdowns on 10 carries.

“We weren’t very consistent tonight,” he said. “We executed in spurts, but we need to be more consistent on both sides of the ball.”

Keith head coach Harry Crum said he was proud of his team for playing until the final whistle.

“Our guys never quit,” Crum said. “We got beat over the top two or three times that really hurt us. Linden runs a version of the Wing-T that we used to run, and they run hard and block hard. Everything they do is hard. We need to get on that level and fight hard every play.”

The Patriots outgained the Bears 558 yards to 68 yards in the game. The teams were even in turnovers with one each, both coming on fumbles. Linden racked up the penalty yardage with 130 yards on 15 penalties compared to Keith’s 40 yards on 6 penalties.

Offensively, Prentiss McCuiston led the way for Linden with 110 yards and 2 touchdowns on 10 carries. Charles Blackmon Jr. had 79 yards and a touchdown on 7 carries. Cordarius Scruggs and Keishaun Scott both had 47 yards on the ground. 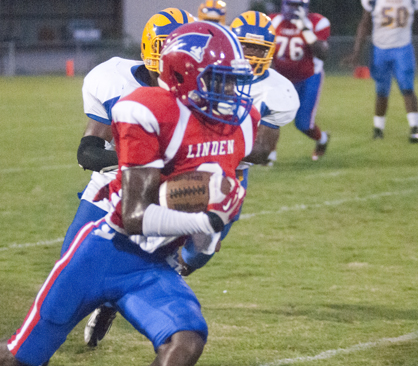 Charles Blackmon Jr. breaks free. He had 79 yards and a touchdown on seven carries.

For Keith, Domonique Jones had 85 yards rushing and a touchdown on 13 carries.

Linden put the first points of the game on the board less than two minutes after the opening kickoff on a 31-yard TD run by McCuiston. CJ Robinson connected with Isiah Scott on the two-point conversion to put Linden on top 8-0.

McCuiston added his second score of the game on Linden’s next drive. He ran it in from 12 yards out. DJ Charleston added the extra point to put the Patriots on top 15-0.

With 1:37 to go in the first quarter, Charleston found a wide open Devonta Poole for a 44-yard touchdown pass to increase the lead to 22-0.

Keith converted their first first down of the game with less than a minute to play in the first quarter on a facemask call on Linden. The Patriots forced another Keith punt, which led to their next score.

Davontae Knox took a handoff 55 yards for a touchdown to give Linden a 29-0 lead with 9:25 to go before halftime. 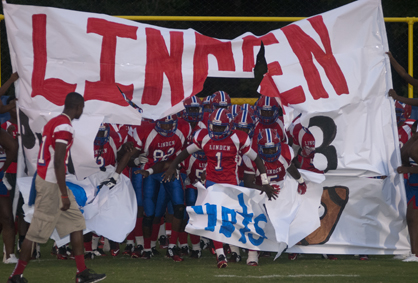 DJ Charleston (1) leads the Patriots onto the field Thursday night.

Scruggs was next in line for the Patriots to get in the endzone, and he scored on a 22-yard burst, making the score 36-0 with 5:46 to play in the half.

Keith had their most successful drive of the game when they put Jones in at quarterback and let him make plays. He got the Bears down the field and finished the drive with a 27-yard TD run. The two-point conversion was added on a run by Lamar Crumpton. The 36-8 score held until halftime.

In the second half, Linden struck first with 9:13 to play in the third quarter on a 1-yard run by Blackmon.

On the ensuing kickoff, Jeremiah Campbell returned the kick 92 yards for a score, and Ja’Quan Lipscomb converted the two-point conversion, making the score 43-16.

Robinson found Poole for his second touchdown reception of the game on a 36-yard pass to put the Patriots on top 50-16.

The final score of the game came with 9:30 to play in the fourth quarter on a 30-yard field goal by Charleston, putting Linden on top 53-16.

Crum said he saw some good things out of his team, but he wants to see more effort going forward.

“We did some good things tonight, but I want to see more effort, especially on the offensive side of the ball,” he said. “This two-game stretch against Linden and Maplesville is tough. These teams are serious about football, and we need to get on their level.”

Linden’s Williams said his team’s lack of experience was a big factor with the inconsistencies he saw.

“When you have a team that lacks experience, you have to play with a high IQ,” he said. “You have to be educated. We have to educate the players. We have to do a lot of teaching because this is a young and inexperienced team.”

As for the 15 penalties his team committed, Williams said that starts with him.

“A couple of the penalties are things I can live with, and a couple were things we’re learning as we go,” he said. “It starts with me. I need to go learn the rules again and do a better job of teaching our players what to do.”

Keith will host Maplesville next week, and Linden will take a week off before traveling to Maplesville.