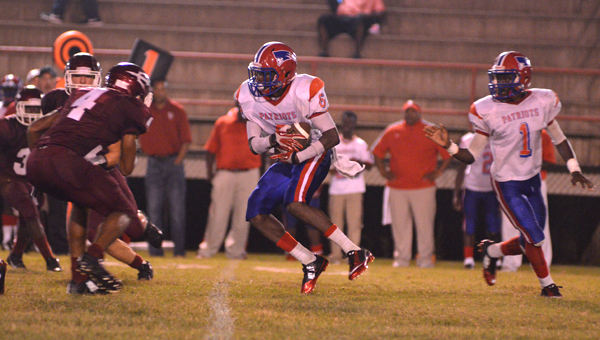 Second-ranked Maplesville outslugged No. 4 Linden, 14-0, in a defensive battle on Friday.

Two teams that like to rely on their ground games to move the football found themselves up against a pair of defenses unwilling to yield an inch.

Only 12 combined first downs were mustered in the game, three of which belonged to visiting Linden (1-2 overall, 1-1 in Class 1A, Region 4 play).

Out of the 33 plays Linden ran, 16 of them resulted in a loss of yardage, as Maplesville defenders regularly penetrated into the backfield.

“They prepared all week,” Maplesville coach Brent Hubbert said about the defense. “They did exactly what we asked them to do. We tell them: prepare, practice and play. That’s what we did all week, and we got the results.”

In a game were there wasn’t much room to be found on the ground, the difference was the passing of MHS junior quarterback Cole Spencer to senior receiver Kendarius Bradley.

Bradley caught three passes for 102 yards and two touchdowns, to go along with an interception on defense, while Spencer completed eight-of-15 passes for 166 yards.

In the second quarter, a mishandled snap on a Linden punt attempt gave Maplesville (4-0, 3-0) the ball on its own 45-yard line, and then Spencer promptly threw deep to Bradley for the first score of the night.

John Schoener added the point-after for a 7-0 Maplesville lead.

With 6 minutes remaining in the third quarter, Spencer found Bradley again for a touchdown, this time from about 40 yards out.

Schoener again added the extra point, and the Devils had more than enough points on the scoreboard because of their stingy defense.