St. Paul’s too much for Linden to handle 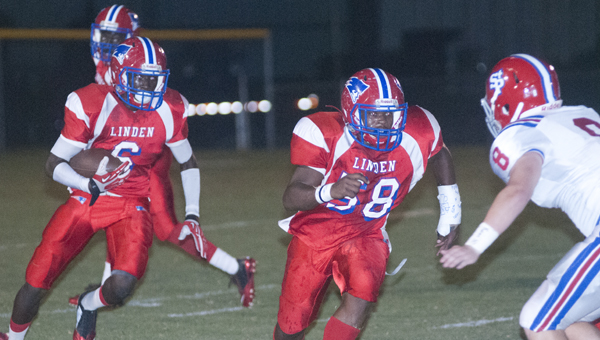 Linden’s Charles Blackmon looks for a hole against St. Paul’s. He led the way offensively for the Patriots with 74 yards on 16 carries.

The Patriots held their own against the Class 5A No. 1 team in the state, but the depth and athleticism of St. Paul’s proved to be too much for Linden.

“I thought we didn’t perform like we needed to perform to win tonight,” Linden head coach Andro Williams said. “We weren’t consistent with our blocks. I feel like if we can be more consitent on our blocks, we can knock out first downs and keep drives going.”

St. Paul’s opened the game with a 67-yard run by Jalen Thompson that set up a 31-yard field goal by Wilson Beaverstock that put the Saints up 3-0.

The teams traded possessions through the rest of the first quarter, and the Saints took a 3-0 lead into the second quarter.

They stretched their lead to 10-0 on a 42-yard TD pass from Christian Mosley to Thompson, then added another touchdown on a scoop and score fumble recovery by Walter Little.

The 17-0 score held until halftime.

In the third quarter, the Saints came out firing, scoring on their first two possessions.

Mosley scored on a 17-yard touchdown run and a two-point conversion was added by Little to make the score 25-0.

The Saints added their final score of the night on a 29-yard TD run by Ostin McPherson.

“St. Paul’s is a great team, but I would have liked to have seen us give them a better look than that,” Williams said.

Linden ended the game with 161 yards total, all coming in the rushing game. The Patriots gave up 269 yards to the Saints in the game.