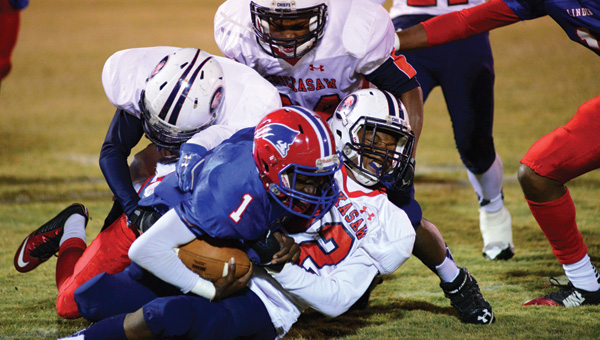 The Linden High School Patriots’ march toward a state championship will continue for at least one more week.

And that’s all that eighth-year head coach Andro Williams is worried about.

“We’re playing them one at a time,” he said. “I don’t even know who we’ll play. This week was all about preparing for Chickasaw and that’s all we’ve worried about.”

That philosophy paid off for the Patriots (7-3). Linden cruised to a 42-0 win over the Chieftains Friday night at Linden Athletic Field in the first round of the AHSAA Class 1A playoffs.

“I thought we came out of the gate and played pretty well,” Williams said. “Chickasaw did a great job of showing us some different looks and it took a while for our guys to acclimate to that, but once we did I felt like we played pretty well.”

Once the Patriots figured it out, they did what they’ve done all season — score points.

“I thought we played a physical game on both sides of the ball,” Williams said.

Early on, the Patriots kept the ball on the ground and pounded their way into the end zone.

A 15-yard scamper by senior Steve Edwards got Linden on the scoreboard with 3:22 remaining in the first quarter. Cordarius Scruggs helped push the lead to 14-0 early in the second quarter when he raced into the end zone from 12 yards out.

With time winding down in the second quarter, the Patriots went to the air. Senior quarterback Dewayne Charleston Jr. connected with sophomore Devonta Poole for a 50-yard touchdown.

The Patriots capped their scoring in the fourth quarter with a 55-yard touchdown run from junior Jeffery Minor and a 32-yard touchdown pass from sophomore Christopher Robinson to junior Tywan Smith.

Dewayne Charleston Jr. was 5-for-5 on point after attempts, and freshman Jonathan Biggs connected on his only point after try.

Dequan Charleston tallied an interception in the win.

“I’m proud of our guys,” Williams said. “They played hard. We’re going to enjoy this one for now, and then we’ll get back to work. One game at a time.”