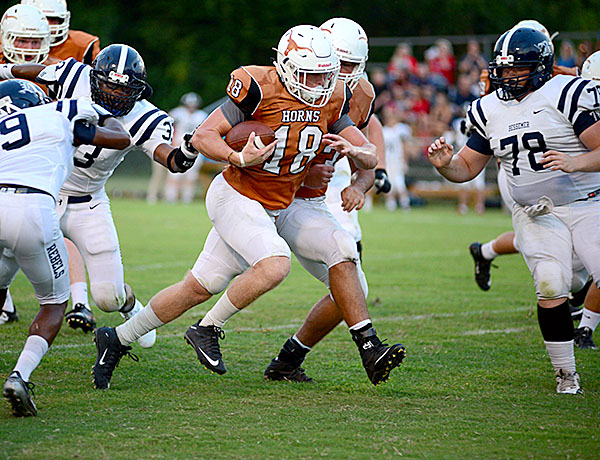 Hayden Huckabee makes his way through the Bessemer defense. The senior finished with over 100 rushing yards.

In a matchup of two AISA top-ten institutions, it was the Bessemer Academy Rebels (1-0) who came away with a 28-6 victory over the hosting Marengo Academy Longhorns (0-1).
“You always want to get better after the first game and we have a lot to work on,” said Head Coach David Barham.
Earlier season jitters were in effect for both teams as Bessemer Academy and MA combined for eight turnovers in the first half by way of either fumble or interception.
Bessemer’s first touchdown came with 3:21 to go in the first quarter when Blaine Smith connected with Ryan Stoves on a short pass. A Jay Fitch extra point followed and the Rebels took a 7-0 lead
Bessemer Academy would extend the lead to 9-0 after a mishandled snap by the punter led to a safety at the 5:23 mark in the first half.
Brandon Cook would break loose for a long run with 1:43 to go in the first half and find the end zone to extend the Rebels’ lead to 15-0.
The opening kick-off would put the Longhorns further behind as Medders would take it for a touchdown to extend the lead to 21-0.
Cason Cook would put the Longhorns on the board with a tough touchdown reception to cut the Rebel lead to 21-6.
“I’m proud of them for not laying down and lot of kids began stepping up,” Barham said.
MA was driving down the field for another score before Brandon Cook would step in front of a Tutt pass and scamper 97 yards for a touchdown. The converted extra point would give the Rebels the final 28-6 advantage.
The Longhorns totaled 207 yards of total offense. Hayden Huckabee led MA on the ground with 106 yards on 25 carries.
Thomas Etheridge led the defense with eight solo tackles, three assists and a forced fumble. Andrew Martin collected five solo stops, forced a fumble and caught an interception.
Bessemer Academy totaled 224 yards of total offense, but also amassed 148 penalty yards being flagged 13 times.
MA returns to action next week with a road contest against Clarke Prep in Grove Hill.