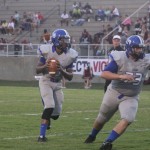 Jamarcus Ezell looks for an open lane against Thomasville. Demopolis came away with a 27-0 victory.

For the first time in the three weeks of football season, all six county schools will be in action this week.
Marengo will start the week with hosting a Thursday night matchup against Fruitdale in a region matchup.
Then on Friday night, A.L. Johnson will travel to Isabella for a first ever matchup between the two schools in a non-region contest.
Our other four in-county schools will all have their first region games of the season.
Sweet Water returns to action this week with a home matchup against St. Luke’s out of Mobile.
The other contest taking place on Marengo County soil is the second ever matchup between Calera and Demopolis at Tiger Stadium.
Marengo Academy will hit the road to Grove Hill and meet Clarke Prep in an important early season matchup for both squads.
Finally, the Patriots will make their way down Highway 80 to Orrville for a matchup with the Keith Bears.

Panthers look to collect first win in home opener.
After battling back to force overtime against Choctaw County, Marengo (0-1) looks to bounce back from a surprising loss and register the first win of the season against the visiting Fruitdale Pirates (1-0) in the first 1A Region 1 matchup for both teams.
Fruitdale enters the contest after collecting a 14-8 victory over R.C. Hatch last week.
History is on the side of Marengo High as the Panthers lead the all-time series over the Pirates 10-7 and has a 9-6 edge over Fruitdale since the teams started playing annually in 2000.
The Panthers have won their last two home region openers.

A.L Johnson lands in Isabella for the first time ever
According to Alabama High School Historical Society, the Eagles football program started in 1975 and the Isabella Mustangs began playing football as far back as 1927.
Both schools have fluctuated as 2A and 1A schools throughout the years, but when the Eagles (0-2) and the Mustangs (0-1) meet Friday night it will be the for the very first time and one will walk away with their first win of the season.
Last week, A.L. Johnson had to play through rain and a two-hour lightning delay as well as overcoming turnovers to still be competitive until the fourth quarter before falling 34-6.
Head Coach Johnney Ford mentioned that the goal this week for his team is to improve in some areas and gain confidence playing their first 1A opponent this season.
“We’ll make sure we cover assignments and play hard football,” said Ford.
A.L. Johnson is looking to avoid its first 0-3 start since 2002.

Sweet Water looking to bounce back in region opener
The Bulldogs (0-1) return to the field for the first time since suffering a season opening loss to Thomasville with a region contest against St. Luke’s in the Wildcats season opener.
This is the opening region matchup for both teams in 2A Region 1.
“They’ll be well coached and play hard,” said Head Coach Pat Thompson of his opponents this week.
The goal for Sweet Water this week as mentioned by Thompson is to get better at what the Bulldogs do and the week in between games allowed his team to do just that.
Being the season opener for St. Luke’s, the only game film available to Thompson was from the Wildcat’s jamboree contest against Mobile Christian.
Historically, this matchup has gone the way of the Bulldogs with Sweet Water having a 3-0 record against St. Luke’s, winning last year’s matchup 40-14.

Marengo Academy takes to the road against a familiar foe
The Longhorns (0-1) look to recover from a grueling 28-6 loss to Bessemer Academy on the road in Grove Hill and spoil the home opener for the Clarke Prep Gators (0-1) who took a tough 37-18 loss at Tuscaloosa Academy.
“We have to play our assignments, makes blocks and we’ll have a chance to win,” said Coach Webb Tutt.
Clarke Prep employees the Wing-T offense and has for years, so there is really no learning curve for new players.
MA has a lot to be confident about heading into the contest after driving the ball down the field on two of the Longhorns’ final possessions. One resulted in a Cason Cook touchdown. The team showed crowd in attendance and each other that they have some fight in them.
This was against a team that had as many seniors as MA did players according to Tutt.
The all-time series between MA and Clarke Prep has been historically even with the Longhorns taking a slight edge 8-6 thanks to two wins over the Gators last season.
There will be no shortage of orange in Grove Hill as both teams look for their first win of the season.

Patriots open region play on the road
The Linden fan base may still be buzzing after a last minute touchdown secured a 13-12 victory of Washington County, but the Patriots (1-0) themselves are moving forward and are prepared to deal with a Keith Bears (0-1) squad that has some confidence after hanging tough in a 38-32 loss to Southside Selma.
This will be the first region contest for the 1A Region 4 opponents.
“They’re an athletic team. They have a lot of size and speed,” said Head Coach Andro Williams.
This will be the first time that Linden will travel to Keith High School as the Patriots have only hosted the Bears in the Williams era.
Williams mentioned that he tries to not let his team get too high or low after wins and losses, which would be easy to do for the Patriots after such a thrilling victory last week.
Linden holds a 6-2 edge in all-time matchups between the two squads and has outscored Keith 106-16 in the past two seasons.

Demopolis to host tough region opponent
This might be the very definition of trial by fire for Head Coach Stacy Luker. After collecting a decisive 27-0 victory in Thomasville, Demopolis (1-0) will host the Calera Eagles (1-0), who beat Bibb County 33-9 last week, in a matchup of the top two finishers of 5A Region 4 from last season.
Turnovers helped keep Tigers from surrendering a score to Thomasville and Demopolis will have to look to create those opportunities once again to secure this victory.
Calera brings in a high-powered offense that returns seven starters from last season. It’s worth noting that this is only the second year in 5A for the Eagles as the school has seen a steady increase in enrollment each year going from 1A to 5A in a span of 20 years.
With that being stated, these two teams have met only once, which was a region contest last season where Demopolis took a 33-19 victory to hand the Eagles their only regular season loss.

College Football Quick Hits
West Alabama will open the season against Stillman College in the ‘Tiger Bowl’ Saturday at Tiger Stadium in Livingston. Kick-off is scheduled for 6 p.m.
UWA defeated Stillman 44-20 last season in Tuscaloosa and has won every matchup in the series sporting a 4-0 all-time series record.

The Alabama Crimson Tide will have no choice to answer the starting quarterback question Saturday when they travel to AT&T Stadium in North Texas to do battle with the Wisconsin Badgers in a neutral site affair. Alabama comes in ranked third in most pre-season polls. Alabama and Wisconsin have met only once and few will remember the 1928 classic that resulted in a 15-0 victory for the Badgers.

Defense is the main concern for the Auburn Tigers and fans and supporters feel like Will Muschamp has solved that problem as the Tigers head to the Georgia Dome to face the Lousiville Cardinals to open the season. Auburn starts the season as the sixth ranked team in the AP poll and secured the victory in the only prior matchup of these two universities in 1974.