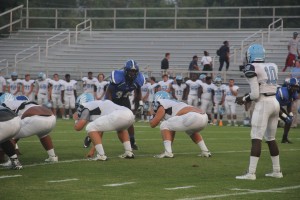 Romelle Cook peeks over the Calera offensive line looking for an opening. Cook and the Tigers take to the road against Jemison this week.

After a week full of competitive high school football for all of the Marengo County schools football teams, this week will serve as a more quiet setting.
Only three county schools have contests this week with only one taking place within county lines, but each game is important as they are all region games.
The Demopolis Tigers will take to the road for the second time in three weeks with a trip to the Birmingham area in a matchup against the Jemison Panthers.
Hitting the road for the first time in the regular season, the Sweet Water Bulldogs will have an early season battle between two potential post-season participants when they meet the Mobile Christian Leopards.
Marengo High School will be the scene for the only football being played in Marengo County as the Panthers host the Chickasaw Chieftains.

Demopolis looks to keep offense rolling
After racking up over 300 yards on the ground, the Tigers (2-0, 1-0 5A R4) travel to Jemison to keep the “ground work” moving in a region matchup.
The hosting Panthers (0-3, 0-1) look to bounce back from a 34-6 loss at the hands of Dallas County last Friday.
So far Jemison has only managed to score six points in each game this season.
After losing offensive star P.J. Blue to transfer, the Panthers have struggled to find someone who could replace his production.
There are no such problems for Demopolis as Jayjerein Craig, who rushed finished with 216 yards against Calera, has emerged as a star in this new offensive system guided by Stacy Luker.
Demopolis and Jemison have met three times on the gridiron with the Tigers taking a 3-0 edge in the all-time series after securing a 49-6 victory over the Panthers last season.
Jemison has allowed 38.7 points per game and the Demopolis offense averages 34.5 while the defense has only given up 23 points, all against Calera.

Sweet Water prepares for tough tussle
Mobile Christian and Sweet Water have been pared as region foes since both teams landed in 2A football in 2012. For two of those years, this matchup was a battle between two teams with a possible region championship.
Only last season was the outlier as Mobile Christian fell to the bottom of the region standings and Sweet Water finished second in 2A Region 1 for the only the second time ever.
The Leopards (2-0, 1-0 2A R1) seem to have the fire back this season averaging 43 points per game on the season. Mobile Christian is employing the spread offense this season and according to Sweet Water Head Coach Pat Thompson, “Look good on film.”
The Bulldogs (1-1, 1-0) will have to matchup with two tough receivers in Devin Curry and Garren Wadsen who the Leopards like to toss the ball to and a running back, Troy Young, who handles most of the running duties.
Sweet Water will look to running back and safety Will Huckabee to answer the challenge.
Thompson mentioned that the Bulldogs have to hang on to the football to be successful in the matchup.
Sweet Water is 3-0 all-time against the Leopards, out scoring them 135-36.

Panthers look to keep momentum at home
After a game winning defensive stand, Marengo (1-1, 1-0 1A R1) looks to continue to right last season’s wrongs as the Panthers host Chickasaw (1-2, 1-0).
The Chieftains come to Dixon Mills for the first time ever after sneaking past McIntosh with a 14-12 victory.
“It’s going to be a tough game, but the guys are looking forward to it,” said Marengo Head Coach Eberne Myrthil.
Expect to see all-state defensive back Keith Gallmon attempt to make plays on both sides of the ball and offensive lineman Charles Evans to be the guy most run plays follow.
Cordarius Pritchett established himself as a player who is going to be a problem for region opponents this season with 96 all-purpose yards, two touchdowns and an interception against Fruitdale. Pritchett made all the key plays when it mattered the most for the Panthers.
Last season was the first ever season for Chickasaw, so the lack of film helped the Chieftains push to a 4-2 region record and a playoff spot.
Marengo fell 46-16 on the road last season, but with a year of film to follow the Panthers figure to be more prepared and ready to compete against this formidable opponent.

College Football Quick Hits
The Alabama Crimson Tide (1-0) will host their first home contest of the season in Bryant Denny Stadium in a matchup against the Middle Tennessee State Blue Raiders.
Alabama moved up to second place in the Associated Press Poll after rolling to a 35-17 victory of #20 Wisconsin.
Derrick Henry led the team finishing with 147 yards and three touchdowns on 13 carries. Jake Coker also impressed in his first start throwing for 213 yards and a touchdown on 15 of 21 passing attempts.
Alabama and Middle Tennessee are meeting on the field for the first time since 2005, a win for Alabama vacated by NCAA violations. The Crimson Tide are 2-0 against the Blue Raiders.

Jordan-Hare Stadium has a brand new video board and it will see its first game day action when the #6 Auburn Tigers (1-0) host in-state opponent Jacksonville State Gamecocks, ranked #4 in FCS.
The Tigers gave fans a scare last week allowing the Louisville Cardinals to put together a fourth quarter comeback before falling short.
New starting quarterback Jeremy Johnson scored a touchdown on the ground and threw a touchdown to Ricardo Louis, who finished as the receiving leader with three receptions for 54 yards. Peyton Barber carried the ball 24 times for 115 yards.
This is the first ever matchup between Auburn and Jacksonville State.

UWA hosts Cumberland on Thursday night in the first ever matchup between the two institutions.
The Tigers (1-0) enter the contest five days after a defensively dominant effort against Stillman College where UWA held Stillman to just 48 total rushing yards and 182 yards of total offense.
Trent Thompson, named starter the night before the game, finished as the offensive statistical leader, throwing for 234 yards and two touchdowns on 19 of 26 attempts.
Rashaad Lee finished with two touchdowns on the ground.