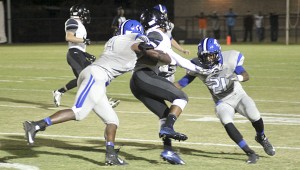 The Demopolis Tiger defense will have to stand tall against a tough Jackson Aggies squad.

Sometimes games with no playoff implications can mean the world when bragging rights are on the line. That is certainly the case in the sixth week of regular season football in Alabama high school football.
All six Marengo county schools have non-region contests this week, but they all carry different meanings of importance.
Demopolis highlights the action this week when the Tigers host the top ranked 5A team Jackson Aggies. This marks the second consecutive week a Marengo school will host a team ranked first in the Alabama Sports Writers Association Poll.
Before that titanic clash, Marengo Academy will play on Thursday for a second week in a row as the Longhorns travel to Butler to face the Patrician Academy Saints.
The Linden Patriots are also on the road this week to face 5A opponent St. Paul’s in Mobile.
Looking to rebound from a shutout at the hands of Washington County, the Sweet Water Bulldogs will be on the road for the third consecutive week to face the R.C. Hatch Bobcats.
This week will mark the first regular season matchup of in-county schools when A.L. Johnson hosts the Marengo Panthers to cap Homecoming week festivities for the Eagles.

Demopolis looking to ruin Jackson harvest
The Tigers (4-0, 3-0 5A R4) will have one of their toughest challenges of the regular season when the top ranked Jackson Aggies (4-0, 3-0 5A R1) come to Tiger Stadium Friday night.
For some seniors on both teams, this matchup will not be anything new because the teams have met every year since 2012. However, it is a little different but very familiar for the head coaches Stacy Luker and Danny Powell.
The head coaches met in five consecutive seasons (2006-2010) while Luker was at Sweet Water and Powell was the head coach of the Leroy Bears. Luker’s Bulldogs won three of the five matchups. In fact, a Luker win at Sweet Water in 2007 was the only loss that kept Powell and Leroy from having consecutive undefeated seasons.
This season, Demopolis has been nothing short of dominant using the ground game led by running backs Jayjerein Craig and Drew Jones and quarterback Jamarcus Ezell. The Tigers are averaging 41 points per game and have only given up 29 points all season led by Rahmeel Cook on defense.
The Aggies have also issued their own brand of dominance scoring 36 points per game, but have only allowed 19 points the entire season. This includes only giving up seven to a St. Paul’s team that has scored no lower than 40 points in all other games and features two NCAA Football Bowl Sub-division recruits on offense.
Look for quarterback Demarcus Williams and running back Michael Phillips to cause trouble from the backfield and receivers Jaylen Jackson, Dearies Pritchett and Kam Pugh to cause problems on the outside.
Demopolis leads the all-time series 6-3-1 against the Aggies and won last year’s matchup 28-21 in Jackson.

Marengo Academy looking to trample over Patrician
In a Thursday night affair, the Longhorns (2-1, 1-0 AA-R2) travel to Patrician Academy (2-2, 1-1 A-R2) in a battle of classic AISA rivals and powerhouses.
Marengo Academy comes in fresh off a rout 41-6 of the Saints’ rivals South Choctaw Academy. Patrician fell to Clarke Prep on the road.
“They present some problems,” said Coach Webb Tutt. “We’re going to have to play assignment football.”
One of those problems will be the quarterback Will Cobb of the zone, read option attack for the Saints. When he isn’t carrying the rock, he’ll hand it off to his backfield buddy running back Kaleb Sessions.
Now that the Longhorns are back under the Wing-T, expect Marengo Academy to give Patrician a heavy dose of Hayden Huckabee and control the ball for most of the game.
This season marks the forty-fifth meeting between the two institutions and they have split each of the previous 44 matchups evenly. This year’s winner gets the all-time series bragging rights for at least a year.
Marengo Academy has won two in a row in the series including last year’s 41-13 win.

Linden faces uphill battle on road
“They don’t normally see our style of play,” said Coach Andro Williams.
St. Paul’s Saints will in fact see a different still of play when the Patriots travel down to Mobile in a matchup of a 1A vs. a 5A school.
The goals are simple in nature, but harder to actually execute. Williams mentioned the Patriots need to get first downs, finish drives, and take care of the ball to leave Mobile with a win. They also will need to play “above their heads.”
Last week, those three areas cost Linden a great chance to upset Maplesville at home.
The Patriots will have to concern themselves with stopping Air Force commit Miller Mosley at the quarterback position as well as the running duo of B.J. Edmonds and Ostin McPherson, Army commit.
It will be up to Linden quarterback Christopher Robinson to guide the offense and move it down the field to give Linden a chance to compete.

Sweet Water looking to get on track
After two consecutive region road losses, the Bulldogs (1-3, 1-2 2A R1) look get on the winning path starting this week in another road game against the R.C. Hatch Bobcats (1-4, 0-3 2A R4).
“We’re feeling pretty good, trying to get some confidence back,” said Coach Pat Thompson.
Sweet Water will do that by going to what they do best, which is to play tough and punishing Bulldog football.
R.C. Hatch is a quality, athletic opponent according to Thompson and will not be a cakewalk for the Bulldogs.
Ka’Cee Goodwin is taking the reps at quarterback and will have to be contained by the Sweet Water lineman and on the outside for the Bobcats is Eric Carter to serve as another concern for the Bulldogs.
“We have to be us,” said Thompson about stopping the Bobcats.

Marengo looks to spoil A.L. Johnson’s homecoming
Rivalry games are always tough and filled with emotion. Homecoming games are always the hardest games for teams to get focused.
When the Marengo Panthers (2-2, 2-1 1A R1) travel to Thomaston for the home opener and homecoming contest for the A.L. Johnson Eagles (0-3), it is sure to be the most emotionally charged contest in the county.
“They’re playing great ball and playing with high intensity,” said A.L. Johnson Coach Johnney Ford.
The Eagles will have to manage the distractions of homecoming week as well as find a way to match the intensity of the Panthers despite not having played a game in three weeks.
All the while, A.L. Johnson will still be looking for their first win of the season.
It will be up to seniors such as Desmond Mare and Michael Mason to lead the team in overcoming all the distractions.
Marengo meanwhile looks to return to the win column after falling on the road in a region game against Millry.
The Panthers’ offense is averaging nearly 30 points per game and is led by the quarterback Cordarius Pritchett, running backs Alphonzo Lewis and Calvin Ferguson, and wide receiver Michael Kennedy.
Marengo leads the all-time series 23-16, but recent games have favored A.L. Johnson with the Eagles taking home victory in the last three games including a 38-24 victory last season. These teams have met on the gridiron every year since 1975.

College Football Quick Hits
Dark times have befallen the Alabama Crimson Tide (2-1, 0-1 SEC) faithful after a heartbreaking and emotional churning loss to the Ole Miss Rebels for the second consecutive year.
The Tide will have to go back to the drawing board this week win the host the Louisiana-Monroe Warhawks (1-1)
Alabama technically doesn’t own a win against ULM as the 2006 victory was vacated and the Warhawks beat the Tide in Saban’s first season in Tuscaloosa.

Speaking of dark times, The Auburn Tigers (2-1, 0-1 SEC) also had a terrible go of it this weekend in a 45-21 loss at LSU.
Auburn has already made a change at quarterback, electing to start redshirt freshman Sean White.
The next contest is interesting for the Tigers as they host Mississippi State at Jordan-Hare Stadium.
Auburn leads the all-time series 61-24-2 against the Bulldogs, but lost last year 38-23.

The West Alabama Tigers (3-0) represented the third Gulf South Conference opponent for Miles College and claimed victory 13-10. The Golden Bears apparently had enough of being outscored 67-24 by the other GSC challengers and gave the Tigers all they could handle before falling and giving up 13 fourth quarter points.
UWA once again played Dezmond Huntley and Trent Thompson at quarterback as the Tigers continue to try an offensive identity.
They’ll have to figure things out while on the road against Texas A&M-Kingsville.
TAMUK and UWA met twice in the late 70’s with each team claiming a victory.