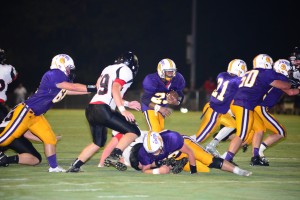 Jaylin Johnson and the Sweet Water Bulldogs must prepare for a region game against the Leroy Bears.

The calendar turns and all of a sudden the end of the regular season in Alabama high school football is staring us right in the face.
Each contest from here on carries mountains of importance for our county teams, whether it be for finishing with a winning record, winning a region title or even making the playoffs for AHSAA or ASIA.
All six Marengo County schools have region contests this week.
Action starts Thursday night when the Demopolis Tigers travel to Livingston to take on the Sumter Central Jaguars.
The road show continues when the Linden Patriots hit the pavement for the second week in row to head to Selma for a matchup against the Ellwood Christian Eagles.
A.L. Johnson Eagle fans won’t be too far behind as they are heading the same way for a matchup against the Keith Bears.
Looking to keep postseason hopes alive, the Sweet Water Bulldogs will host the Leroy Bears in a must win game for the Bulldogs.
Playing in their second region game of the season, the Marengo Academy Longhorns look to keep their momentum rolling against the Pickens Academy Pirates.
Finally, the Marengo Panthers host the McIntosh Demons and continue the push for a potential playoff berth.

Demopolis take to the road for region matchup in Livingston
After dropping their first contest of the season, the Demopolis Tigers (4-1, 3-0) look to right the ship in a Thursday night contest against the Sumter Central Jaguars (1-4, 1-2) in a 5A Region 4 matchup.
Turnovers doomed the Tigers as DHS recorded five on the night and never really got the offense out the gate in the 35-20 loss.
This week should serve as a reprieve for the Tigers as Sumter Central’s only win is against a winless Wilcox Central squad.
However, these are the types of games where penalties and careless turnovers can make the game closer than it should.
The goal is simple for Demopolis. Be physical and control the line of scrimmage and the Tigers should clinch their twentieth consecutive playoff berth.
Demopolis has yet to surrender any points on the road, shutting out both Thomasville and Jemison in their home stadiums.
Sumter Central and Demopolis have met all three years of the school’s existence and the Tigers have won all three by a combined score of 121-15.

Linden prepares for battle in the trenches
The Patriots (2-2, 1-1) continue their quest to be the most physical team in the state in a 1A Region 4 matchup against the Ellwood Christian Eagles.
Before the Patriots can focus on the Eagles, they will have to get over a tough road loss last week to St. Paul’s. In the contest, won 31-14 by St. Paul’s, Linden had several chances to score derailed by turnovers.
Linden will spend the week correcting the turnover issue in preparation for Ellwood Christian.
The Patriots will also be preparing for a spread offense, which doesn’t always mean playing the pass. The spread offense will allow the Eagles skill players.
Expect players like running back Rayford Mitchell to try create issues for the Linden defense.
Also, expect Ellwood Christian to try to control the line of scrimmage on defense using a 5-2 defense.
Linden won last year’s meeting 61-6 and that was the first time the schools ever met on the gridiron.

A.L. Johnson fights to keep hope alive
The good thing about playing in 1A Region 4 is that it currently has only five teams and that one win could possibly get your team in the playoffs, especially when the region includes Maplesville and Linden.
The A.L. Johnson Eagles (0-4, 0-0) look to try and secure a win in their first region game of the season against the Keith Bears (1-4, 1-2) who for all intent and purposes are playing for third place in the region at this point.
Last week A.L. Johnson lost a homecoming heartbreaker in double overtime to Marengo 40-38.
Although the Eagles have not registered a win, they have only not been within a touchdown of a victory in one game, West Blocton, and that one was 7-6 before a two-hour lightening delay.
Keith is a team that runs downhill, but out of spread formations to give the running backs more room to operate. The running back Dominique Jones has been able to benefit directly from that. It also helps to have Morris Collins, a 6’4’’, 270 lbs. lineman, creating room and protecting the quarterback, Brian Crum.
The key for the Eagles will be containing these key players and a playoff spot can be clinched Friday.

Old rivals clash in important matchup for Sweet Water
It’s crowed at the top in 2A Region 1. There are currently two losses between the top four teams meaning that taking a third loss will put your team in serious trouble.
This is the issue that Sweet Water (2-3, 1-2) faces when the Leroy Bears (4-1, 2-1) come to town.
The Bulldogs can’t afford to lose a tiebreaker scenario to the Bears, but on the flipside a win could still propel the Bulldogs to an outside chance at possibly a second place finish.
A loss won’t eliminate Sweet Water from playoff contention, but it will make qualifying extremely difficult resulting in the Bulldogs missing the playoffs for just the second time since 1997. They missed the playoffs in 2000.
Last week, the Bulldogs recorded a dominant 68-0 victory over R.C. Hatch.
“We needed that,” said Coach Pat Thompson. Our boys played well.”
The Bears have been a spread team under current head coach Jason Massey and will throw and run out of affectively according to Thompson.
Quarterback Chase Warren and running back/wide receiver Jordan Sellers were identified as key players to contain on the Bears squad.
Sweet Water has won four straight games over Leroy including a nail-biting 28-25 victory last year. The Bulldogs lead the all-time series 13-7.

Marengo Academy looks to prevent a Pirate pillage
Marengo Academy (3-1, 1-0) has been on fire since losing the season opener to Bessemer Academy. The Longhorns now look to put that three game winning streak on the line against the Pickens Academy Pirates (2-3, 0-1) in Aliceville in an ASIA AA Region 1 affair.
Coach Webb Tutt characterized the Pirates as “scrappy” and that they always played hard.
Pickens Academy employs the Georgia Tech option, so the ball will rarely be in the air.
With skilled players in all the key spots for the Pirates, the goal for the Longhorns will be to control the line of scrimmage and force the Pickens Academy to play from behind most of the game.
Marengo Academy won last year’s meeting defeating the Pirates 40-0, but Pickens Academy holds the all-time series edge 16-19.
The Longhorns have scored at least 41 points in their last two games since switching back to the wing-t offense under Tutt.

Marengo looking to pounce on weary Demons
The Marengo Panthers (3-2, 2-1) control their destiny when it comes to everything as far as post season is concerned except for winning the 1A Region 1 title. Hosting a playoff game in Dixon Mills is still a very real possibility, which is saying a lot for the team that finished just outside of a qualifying spot last year.
With the McIntosh Demons (0-4, 0-2) coming to town, the Panthers figure to be able to keep all of the goals on track.
Last week, the Panthers got to play spoiler to rival A.L. Johnson’s homecoming celebration with a 40-38 overtime win.
The danger for Marengo here is coming out flat against a winless opponent after such a hard fought, emotional win against a rival.
McIntosh will have to recover from the recent resignation of head coach Warren Roberts, Jr., who posted a 1-13 record while coach the Demons. Renard Davis will coach the team in the interim.
The Panther blanked McIntosh 30-0 last year, but the Demons hold the all-time series advantage 5-12.

College Football Quick Hits
Crimson Tide fans can rejoice, because Alabama (3-1, 0-1 SEC) is back in the win column with a 34-0 victory over Louisiana-Monroe. However, Crimson Tide fans are probably very concerned with what lies ahead Saturday in a road matchup against the eighth ranked Georgia Bulldogs.
Saturday could serve as the first time in over 70 games that Alabama enters as a betting underdog, however talent wise the Crimson Tide have a slight edge overall.
Alabama leads the all-time series 37-25-4 against the Bulldogs.

The tumble continues for the Auburn Tigers (2-2, 0-2) as they fell at home 17-9 against the Mississippi State Bulldogs. The offense was able to move the ball, but just unable to reach the end zone.
This week the Tigers will have sort of a reprieve when the San José State Spartans visit the Plains. It is worth nothing that the Spartans have averaged 448.2 total yards a game.
Auburn defeated the Spartans in their one previous matchup last year 59-13.

The West Alabama Tigers (4-0) will have a tough test this weekend in Tiger Stadium when the West Georgia Wolves come to town in UWA’s GSC opener. West Georgia is ranked as high as second in the nation in some polls.
This will also mark the return of former UWA head coach Will Hall who coached the Tigers to two playoff appearances during his tenure.
It will be interesting to see if the Tigers top ranked pass defense can slow the run-heavy Wolves’ offense.
West Georgia leads the all-time series 19-14, but UWA has won four of the last five.