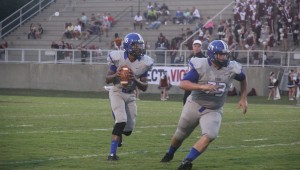 Jamarcus Ezell looks for an open lane against Thomasville. Demopolis came away with a 27-0 victory.

It’s starting to feel like autumn in Alabama, which means shorts and a t-shirt one day and a nice sweater the next day. Sometimes that could even be the same day.
The changing weather also means that the end is near for regular season football. It’s just three more weeks including this one for playoff positions to be solidified and the march to state titles can be made. This is the week nine football preview.
The Demopolis Tigers have a chance to clinch a share of the 5A Region 4 title with a road win against the Wilcox Central Jaguars Friday night in Camden.
Marengo High School still has a chance to get a share of the 1A Region 1 championship, but will have to hit the road to face the J.U. Blacksher Bulldogs who will also be playing for first place in the region.
A share of the AISA-AA Region 1 title is already clinched for Marengo Academy, but the Longhorns look go undefeated in region for the third year in a row against the Wilcox Academy Wildcats Thursday night in Camden.
Every region game matters for Sweet Water and after surviving an overtime scare on the road, the Bulldogs return home to face the Choctaw County Bulldogs.
After giving up a halftime lead in the rivalry game against Linden, A.L. Johnson will have to move forward in preparation for a 1A Region 4 matchup against the top ranked team Maplesville Red Devils.
Finally, Linden, who has rapped up a spot in the playoffs and finished region competition, will face Billingsley in a matchup of 1A opponents.

Demopolis travels to Camden for last road region game
After thumping Central Tuscaloosa 42-12 in the DHS homecoming game, the Demopolis Tigers (6-1, 5-0) travel to Wilcox Central (0-7, 0-5) with a great opportunity to secure a share of the 5A Region 4 title for the second consecutive year.
The Tigers continue to use a dominant run game and stout defensive effort to decimate region opponents as DHS has averaged 43.4 points per game on offense and have only given up 9.4 points per contest.
An even more remarkable statistic is that the Tigers have only surrendered six points on the road shutting out Thomasville and Jemison before finally giving way to a Sumter Central score against the reserves.
Wilcox Central enters the contest after suffering a 55-22 road loss to Dallas County.
This all-time matchup goes in favor of Demopolis who holds an 11-3 series edge and has seven consecutive victories over the Jaguars. DHS won last year’s contest 58-6.

Marengo looks to stay alive in race to region crown
The Panthers (5-2, 3-1) still have a couple of games left in 1A Region 1, but if the Panthers want to retain control on whether they start the postseason on the road or possibly win the region, they must win on the road against the J.U. Blacksher Bulldogs (6-1, 4-1). Blacksher can clinch a share of the region title with a win.
In most regions, a 3-1 record would be a good place to be, however in this region the top teams have all beaten each other and separation from first to fourth could be just a one game difference.
The Bulldogs have been dominant the season outscoring opponents 309-121. Blacksher’s only loss came in a 21-20 defeat to Chickasaw.
Marengo is not the beneficiary of history as the all-time series leans in favor of J.U. Blacksher 9-6, however the Panthers did grab a victory last year winning 52-36.
This game will come down to whether the young Marengo team can beat a Bulldog squad with several senior playmakers.

Marengo Academy looking to stay perfect where it matters
Sure, having a zero in the loss column looks nice on paper and in the yearbook, but region championships and state title rings also look nice in the annual as well.
Marengo Academy (5-1, 3-0) looks to finish off another year with a zero in the loss column in region competition.
Having already clinched the AISA-AA Region 1 title, the Longhorns will look to finish the regular season healthy, while maintaining a competitive edge as the season draws to a close.
Wilcox Academy (2-4, 1-1) may not have a record that screams tough matchup, but the Wildcats will be looking to cause a few bruises and will not make this region contest easy.
Since Webb Tutt took over as head coach, the Longhorns have run from the Wing-T and have yet to score less than 41 points in a game. In fact, the defense has been just as dominant as the offense with MA only giving up 26 total points since the coaching change.
All-time, the matchup has been close to even with the Longhorns holding a slight 14-12 edge courtesy of two straight wins. Last year, MA claimed a 47-10 victory.

Sweet Water continues road to playoffs in another must win contest
At this point, it seems like every Sweet Water game is a potential prizefight. Each contest is as important as the next and a loss means the end of everything for 2A Region 1 team.
Post-season hopes are on the line again and the Bulldogs (4-3, 3-2) will need to defeat the Choctaw County Tigers (4-3, 2-3) in Nolan Atkins Stadium.
No one expected either team to be in the respective current positions. No one outside of Choctaw County expected to be competitive enough to win a game, but after region wins against heated rival Southern Choctaw and St. Luke’s the Tigers are still alive in the playoff hunt.
Meanwhile, Sweet Water is in a tough spot, but still control their playoff destiny. Currently in third place, a win would all but secure at least a fourth place finish heading into the final week of region play.
Nothing can be assumed however. Just look at last week when two fourth quarter turnovers allowed Southern Choctaw to take a 21-14 lead with under four minutes to go.
Sweet Water won the game 24-21 in overtime, but a contest like that goes to show that nothing is guaranteed in these games.
Choctaw County holds the all-time lead in the series with a 19-11-2 mark, however Sweet Water has dominated recently including winning five straight and the last three as region opponents by a combined score of 110-14.

A.L. Johnson looks to bounce back against tough opponent
Losing any contest is tough. Losing one after a halftime lead is really tough. Then to have that loss go to a region and local rival is just heartbreaking. To compound the issue, the A.L. Johnson Eagles (1-5, 1-1) do not have time to feel sorry over the loss as the top ranked team in 1A and the team currently atop the 1A Region 4 standings, Maplesville Red Devils (6-1, 3-0), travel to Thomaston.
The Eagles were flying high with a 6-0 halftime lead over the visiting Linden Patriots before turnovers doomed A.L. Johnson as they have so many times this season.
The Thomaston team can not afford to have those mistakes against Maplesville who has dominated 1A competition outscoring opponents 169-32.
Maplesville is making the second of three trips to Marengo County having already defeated Linden 20-7 and has a scheduled meeting with Sweet Water on Oct. 30.
The Red Devils have never lost to A.L. Johnson recording a 6-0 record over the Eagles.
Nothing is impossible and under Head Coach Johnney Ford, A.L. Johnson has shown that the team has the mental fortitude to play competitively with any opponent.

Linden looks to stay healthy and competitive in non-region affair
The unfortunate side of playing in a region with only five teams like 1A Region 4 is that so many games on the schedule hardly count towards playoff seeding. Most games count however for personal pride and momentum.
The Linden Patriots (4-2, 3-1) know they will be in the 1A playoffs and they know they’ll be hosting at least in the first round, so the matchup against the Billingsley Bears (3-4) is more about showing the fans, other 1A teams, and themselves that they are capable of competing at a championship level.
After a 49 point second half effort against A.L. Johnson, the Patriots will look to play a complete game of physical, dominant football against the Bears.
Billingsley comes in after a tough 28-23 loss to 1A Region 3 opponent Notasulga.
Linden has never lost to Billingsley with a perfect 3-0 record against the Bears. The teams last met in 2009 with Linden taking a 39-0 victory.

College Football Quick Hits
The Alabama Crimson Tide (5-1, 2-1 SEC) has given fans an uneasy feeling most of the season in the conference games. Despite a 27-14 victory over the Arkansas Razorbacks, outsiders are concerned with rather or not the team is a national title contender. Don’t ask Nick Saban about that though.
Alabama has another tough game, this time on the road against the ninth ranked Texas A&M Aggies (5-0, 2-0) in College Station. The Tide defense will have a tough game ahead trying to slow down Kyle Allen and the high-powered Aggies offense.
Alabama is 5-2 all-time versus Texas A&M including a 59-0 shutout in Bryant-Denny Stadium last season.

The Auburn Tigers (3-2, 0-2 SEC) are back after a bye week in the schedule and hitting the road to Lexington for a matchup against the Kentucky Wildcats (4-1, 2-1) on a Thursday night.
It’s a weird place to be in for Tigers, starting the season as a preseason team and now playing a road mid-week game as possibly the underdog.
Auburn has still not declared a starter at quarterback after rumors that Jeremy Johnson might return as the starter swirled last week.
Auburn has dominated the all-time series with a commanding 25-6-1 record against Kentucky.

It’s homecoming for the West Alabama Tigers (4-2, 0-2 GSC) and the infusion of spirit may just be what the doctor ordered for the Tigers, who are reeling from consecutive conference losses after a 4-0 start, matchup against the Shorter Hawks (2-3, 1-1).
Harry Satterwhite took the majority of snaps at quarterback for UWA and may look to have a similar role this weekend.
Senior running back Javae Swindle has a chance to make history in front of what will be the largest crowd of the season needing 21 yards to become the all-time leading rusher in school history.
UWA has never lost to Shorter, sporting a 3-0 record against the Hawks including a 55-10 road victory last season.