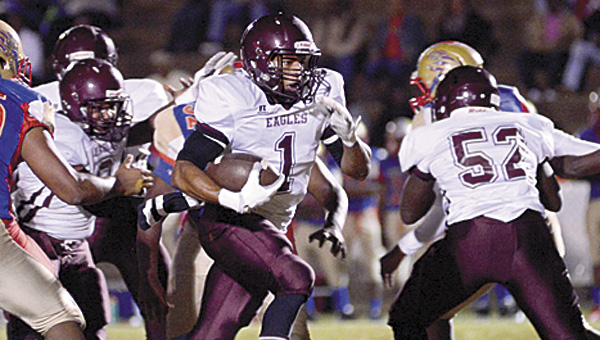 Desmond Mair finds some space against the Greene County defensive. Mair had a limited number of carries, but made the most of them finishing with the team high in rushing yards.

A failed fake punt attempt turned from disaster into a teachable moment for the A.L. Johnson Eagles and a game-winning drive that allowed the Eagles to collect a 32-30 win on the road against the Greene County Tigers.
With the win, A.L. Johnson moves to 3-6 overall and heads to the playoffs on a two game wining streak. Greene County closes the season 1-9 with the Thursday night homecoming loss.
“It’s not about how you start, it’s how you finish,” said Coach Johnney Ford. “The hottest team at the end of the year is the one that’s going to win.”
A.L. Johnson got on the board first when Desmond Mair broke free for a 27-yard touchdown with 6:14 on the clock in the first quarter. The two-point conversion attempt fell short, but the Eagles gained a 6-0 lead.
Later in the quarter, Lewis Anderson scored on a short 2-yard run to push the lead to 12-0 in favor the Eagles.
After a scoreless second quarter, the offensive fireworks started to fly.
The first shot started with 8:02 remaining when Desmond Mair broke free for another long touchdown, this one for 50 yards and A.L. Johnson went up 20-0 after a successful two-point conversion.
On the Eagles ensuing possession, Edward London’s attempt to throw the ball away was ruled a fumble recovered by Erin Williams who returned it for a Greene County touchdown with 5:44 remaining. A successful two-point conversion cut the lead to 20-8 in favor of A.L. Johnson.
Then the fourth quarter started and the real fun began for fans in attendance.
First, Lewis Anderson found the end zone for a 13-yard score to give the Eagles a 26-8 lead with 11:52 remaining in the game.
Then the Tigers took advantage of defensive and mental miscues from A.L. Johnson to storm back with 22 unanswered points.
This started with a short 2-yard touchdown with 7:38 to go in the game to close the gap to 26-16 on a quarterback keeper by Denzel Davis and a successful two-point conversion.
After a three and out by Eagles, two unnamed players decided to go for a fake punt in Greene County territory. The play was unsuccessful and allowed the Tigers great field position in A.L. Johnson territory.
“We’re learning. We have about six seniors, so it’s a teachable moment,” said Ford.
Greene County took advantage and scored to get the tally to 26-22 with 5:23 remaining.
After a muffed punt by the Eagles, Greene County had great field position again and took advantage as Davis found his favorite target Kevin Grant on a 35-yard touchdown pass to give the Tigers their first lead of the night with 2:53 on the clock which would be too much time for Greene County to leave.
Ford said, “This would be a championship drive. This is a drive that helps teams win championships and build character.”
And the next drive was just that as the Eagles marched down the field and the drive was capped by a 1-yard run by Desmond Mair who powered through to give A.L. Johnson the 32-30 lead with 23 seconds remaining.
“My team is young and they made some mistakes, but they found a way to win,” said Ford. “At the end of the day, that the most important thing.”
Mair finished with the team leading 202 yards and three touchdowns on nine carries and added a sack, fumble recovery, and four tackles defensively. Deandre Croom led the defensive with six tackles.
A.L. Johnson will now turn its focus on the 1A AHSAA playoffs and a matchup with Region 2 runner up Brantley next Friday.
Ford said, “Brantley has a lot of tradition. I feel like if we go down there and play our ball, we’ll have a chance, but we can’t make bone headed mistakes.”