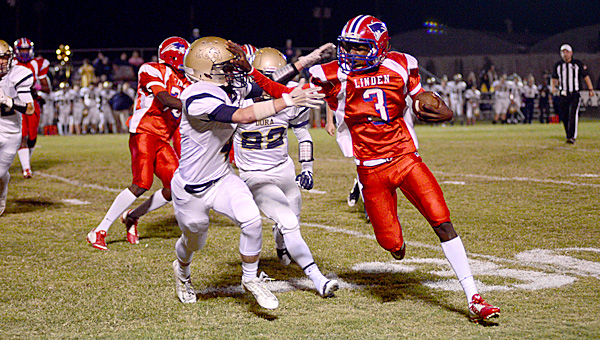 Quarterback Christopher Robinson throws a tough stiff arm against Benny Copeland from Dora. The Bulldog defense couldn’t stop Linden from scoring at will most of the night.

The size advantage was definitely in favor in the visiting Dora Bulldogs, but the Linden Patriots used their skill and speed advantage to come away with a 38-24 victory in their final season game.
With the win, Linden moves to 6-2 overall on the season while Dora will finish 0-10, winless for fifth time in the 90 year history of the football program.
Linden got on the bored early when Dequan Charleston broke free for a 17-yard touchdown with 10:18 on the first quarter clock. Isaiah Scott missed his extra point attempt, but the Patriots gained a 6-0 lead.
Charleston was not done in the first quarter and with 5:37 remaining he broke free for a 41-yard touchdown to push the lead to 12-0. Christopher Robinson fumbled the snap on the two-point try after the score.

For more details see the Saturday, Oct. 31, print edition of the Demopolis Times.