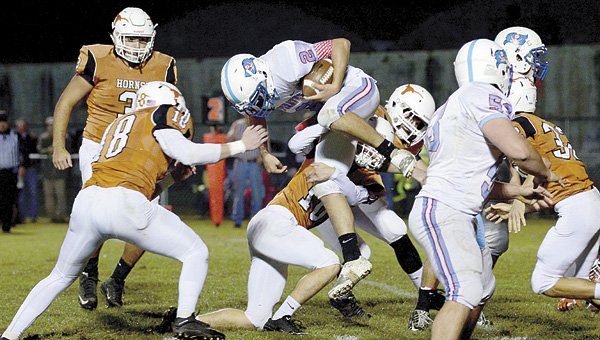 It was a team effort for the Longhorn defense as Marengo Academy did a great job of holding down the Pickens Academy offense and held the Pirates to under 140 yards of total offense.

Pickens Academy tried as hard as it could to move the ball consistently against the dominant Longhorn defense, but in the end Marengo Academy was just too much for the Pirates and takes a 48-7 win to advance to the AISA-AA Championship Game.
“Any time you win and get to play for the state championship it means the world,” said head coach Webb Tutt.
The Longhorns were the first to score with 8:30 on the first quarter game clock when Robert Tutt found Andrew Hawkins on a 60-yard catch and run touchdown. Tutt nailed the PAT to give MA a 7-0 lead.

For more details see the Saturday, Nov. 14, print edition of the Demopolis Times.