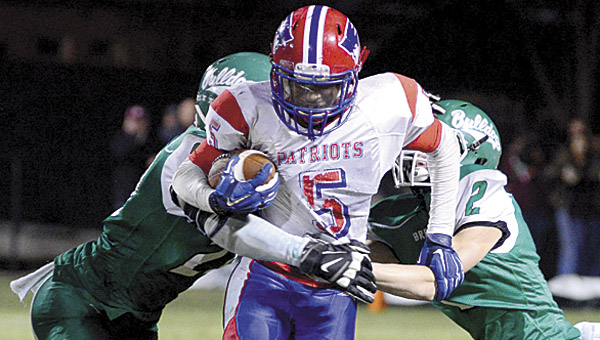 The Linden Patriots is the last Marengo County team standing as they dominated Brantley, earning a 41-0 victory.
The game got off to a quick start when Dequan Charleston picked off a Brantley pass and returned it 75 yards for a touchdown. The Patriots went on to score 21 points in the first quarter. They would score another in the second to take a 28-0 lead into the half.
Linden would score six points in the third and another seven in the fourth to wrap up the scoring.
Charleston led the way for the Patriots with three total touchdowns. In addition to the defensive score, he also had two other touchdowns on 75 yards rushing and 23 yards receiving.
Christopher Robinson also had a strong game at quarterback, going 5-for-6 for 82 yards and a touchdown.
“The guys plays hard, sound football. Our defense gave up some yardage on a few drives, but they always made the stops when they had to,” LHS Coach Andro Williams said.
The Patriots will travel to Maplesville for the semi-state contest with the winner moving on to the state championship.