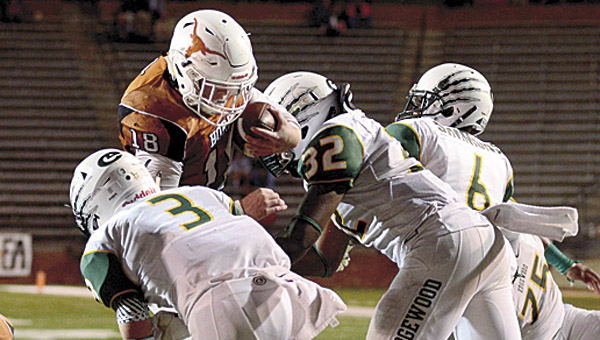 Senior Hayden Huckabee goes up and over the defensive front for a score in the AISA State Championship game Friday afternoon in Troy.

Big plays for big yardage was the difference as the Marengo Academy Longhorns fell short, 40-34, to Edgewood Academy in the AISA-AA Championship Game in Troy Friday.
The win extended Edgewood’s winning streak to 71 games and gave the Wildcats their sixth consecutive championship. MA’s loss is the second consecutive championship game loss and finishes the season 10-2.
“The quarterback is unbelievable,” said Head Coach Webb Tutt. “Games usually come down to about four or five plays and he made the ones he needed to make.”
“I’m proud of our boys,” Tutt said. “They played a great game and Edgewood is one heck of a team.”
Marengo finished with 422 yards of total offense and 306 rushing yards.
Hayden Huckabee led the way for Longhorns with 27 carries for 142 yards and three touchdowns. Zac Murphy added 84 yards and a score.
Robert Tutt finished 4 of 8 passing with 116 yards and a touchdown to Cason Cook, who finished with three receptions for 111 yards.

For more details see the Saturday, Nov. 21, print edition of the Demopolis Times.