Maplesville runs past Patriots in semi-final 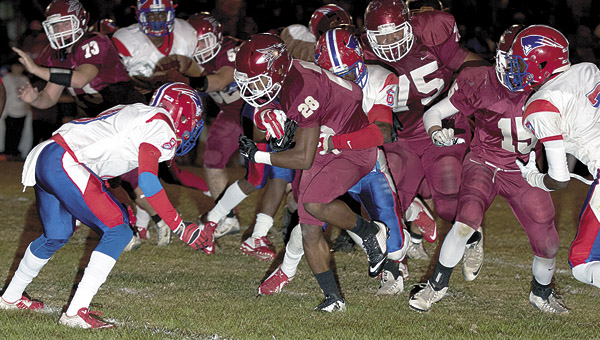 For the third consecutive season the Maplesville Red Devils have earned a spot in the AHSAA 1A State Championship Game. With a 50-19 win over the Linden Patriots on Friday night in the semi-finals, the Red Devils secured a trip to Bryant Denny Stadium where they will defend last year’s championship against Cedar Bluff.
For Linden, this was a season that saw the team grow and get stronger with each game, allowing them the opportunity to play for a shot at the state title contest, according to head coach Andro Williams.
“We kept getting better throughout the season and we really came together as a team. I’m very proud of the way our guys competed this season and I’m already looking forward to next season,” Williams said.
While Maplesville led the Patriots throughout the Friday’s contest, Williams said he felt his team competed and stayed in the game through three quarters, down by only 10 going into the fourth before the Red Devils ignited for 27 more points.
“I felt we played a good game in many areas, we just couldn’t stop their running game,” Williams said.
The Red Devil offense would waste little time in setting the pace with a 65 yard scoring drive on their opening possession that would be capped off with a 1-yard touchdown run by Terrance Dunlap. With John Schoener’s PAT, Maplesville lead 7-0.
A Corey Hall fumble recovery would set the Maplesville offense up with their second possession but the drive would end on turnover leading to a Patriot 49-yard scoring drive and a 27-yard touchdown pass from Christopher Robinson to Dequan Charleston.
The tie wouldn’t last long as the Red Devils would score on their ensuing possession as Dunlap would add his second touchdown of the night on a 5-yard carry to make the score 14-7 as the first quarter came to a close.
A Linden punt would back the Red Devils up deep inside their own red zone and a Maplesville turnover would set Linden up first and 10 at the Red Devils’ 13. Two plays later a pass to Charleston would be hauled in at the 15, but Charleston would back track inside his own end zone and would be hauled down by a host of Red Devil defenders for the safety.
Maplesville would go to halftime up 16-7.
Midway through the third quarter Dunlap would strike again, this time for 62 yards to put the Red Devils ahead 22-7, but the Patriots would answer with a touchdown of their own on a 19-yard touchdown pass from Robinson to Jaleel Jones.
With 2:20 left in the third, Maplesville lead 23-13.
A nine yard touchdown carry by Dunlap with 9:24 to play, would give Maplesville a 30-13 lead and with the Red Devil defense stuffing the Patriots on a forth and ten at the Red Devil fourteen the Maplesville offense would once again go to work.
One play later and Dunlap would break through the Patriot defense for a eighty-six yard touchdown to extend the Maplesville lead to 37-13 with 8:08 left on the clock.
The Patriots would answer the Red Devils score with a 68-yard pass from Robinson to Jones to make the score 37-19.
With just 2:45 to play, Dunlap would drive the proverbial nail into the coffin of the Patriots with his sixth touchdown of the game from two yards out to give Maplesville a 43-19 lead.
If the Patriots weren’t finished off by Dunlap, a 27-yard pick-six by Nathaniel Watson would close the door and begin the celebration on the Red Devil sideline.
A last second prayer by the Patriots would result in a interception by Adam Harrison and would further fuel the flames of the Red Devil celebration as the clock read all zeroes as Maplesville claimed its third consecutive state title game appearance.
Dunlap led the Maplesville ground game with 291 yards on 22 carries with six touchdowns.
The Red Devils will face the Cedar Bluff Tigers on Thursday December third at 3:00 from Bryant Denny Stadium in Tuscaloosa for the AHSAA 1A State Championship.