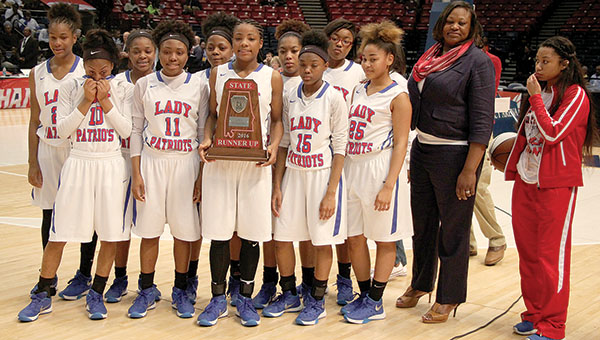 The Linden Lady Patriots with their State 1A Runner-up trophy following the championship game Thursday at the Birmingham-Jefferson Civic Center. The Lady Patriots fell to Spring Garden in the title game, 64-38.

A strong push through the playoffs ended just short of a state championship for the Linden Lady Patriots.
The Lady Patriots entered the 1A state title game unranked and ultimately fell to the fourth-ranked Spring Garden Lady Panthers, 64-38.
LHS Head Coach Teressa Bolden said her team could take pride in its hard work and improvement throughout the season.
“It was a great season,” Bolden said. “We challenged ourselves throughout the season and felt there were very few 1A teams that were better than us. We’ve known all year long that we could be successful … others are just catching up.”
The Lady Patriots got on the board first with a bucket by Dajia Miller and it proved to be the only lead they would have throughout the contest. Tied at 4, Spring Garden’s Kerstin Bryant hit the first of four three-pointers in the period for the Panthers, lifting them to a 20-8 edge going into the second.
A team that prides itself on its defensive play, Linden was knocked on its heels with the three-point shooting of Spring Garden.
“Our defense carried us all year, but they came out shooting very well. They hit a lot of outside shots that they weren’t able to hit against Keith (in the previous game),” Bolden said.
The Lady Patriots applied more pressure, playing more physical in the second period, but continued to fall behind as Spring Garden began the period with a 9-3 run, lifting its lead to 29-11. But, Miller and Toysha Boykin connected for consecutive baskets followed by a Keira Phillips basket and foul. Miller connected on the free throw as Phillips nursed a temporary injury to narrow the lead to 11, 29-18.
With two more baskets down the stretch, Spring Garden extended its lead to 33-18 at the half.
Beginning the third period, the Lady Patriots intensified its physical play and was able to cut into the lead slightly. Phillips hit the first basket of the period followed by another by Amber Richardson. Boykin hit one of two free throws as did Tameria Aldridge to make the score, 39-26. But, the scoring dried up for the Lady Patriots who would only get one more basket in the period courtesy of Richardson.
At the end of the third, Spring Garden held a 47-28 lead.
Richardson led the Patriots in the final period with seven points with Phillips adding a bucket and Boykin hitting connecting on a free throw.
Spring Garden connected on seven three-pointers in the game, including four by Savannah Dempsey. Tykeah Rogers, the tournament MVP, led the Lady Panthers with 25 points.
The leading scorer for Linden was Amber Richardson with 20. Richardson was recognized as a member of the All-Tournament squad. Rounding out the scoring for Linden was Dajia Miller with eight, Tomysha Boykin with seven, Imiya Agee with four, Kiera Phillips with three, and Tameria Aldridge with one.
The win secured Spring Garden its fifth state title in school history while it was the first state title game for the Lady Patriots.
“The girls handled themselves very well and I’m very proud of them,” Bolden said. “This team is building a foundation for our program. We are going to continue focusing on the positive. At the end, we were one of two teams still playing basketball. This wasn’t our time, but now we know what we have to do to get back there and give ourselves another chance. These girls are ready and looking forward to putting in the work to get back.”