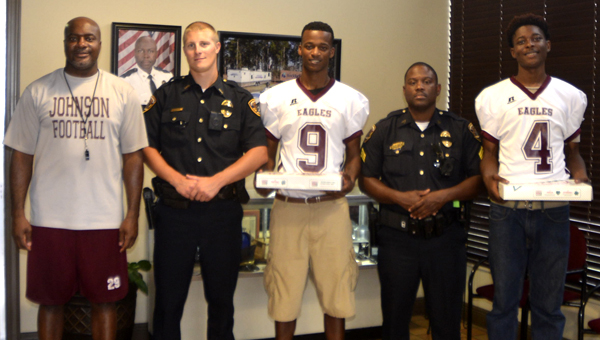 Recognizing the service and sacrifice of others is a key part of growing, development and coming to understand the world around a person.

A.L. Johnson Head Coach Johnney Ford is doing his part to help his players do just that through the “Eagle Give Back” Initiative.

After the first day of practice in preparation for the 2016 football season, Ford along with seniors Leo Baker and Deaundra Bridges, traveled to Tuscaloosa to purchase some Krispy Kreme doughnuts.

From there, the group would travel to every police station in Marengo County to deliver the tasty confectionery treat.

“We are trying to make sure that our boys understand the sacrifices the people around them make to take care of them,” said Ford. “The police here and all over the county work hard to keep us safe during the day and before and after those games.”

Ford, who also coaches the Eagles boys’ basketball team, is entering his third season as head coach of the Thomaston based 1-A school after replacing the retiring Mose Jones.

A.L Johnson will be looking for their third consecutive playoff berth under Ford and fourth overall when the Eagles kickoff the season August 16 in a home contest against R.C. Hatch. The Eagles will also have to contend with sharing a region with Linden, Sweet Water and Marengo High.

Regardless of what happens on the football field, it’s clear that Ford has made it a primary initiative to develop his team on the field and off.