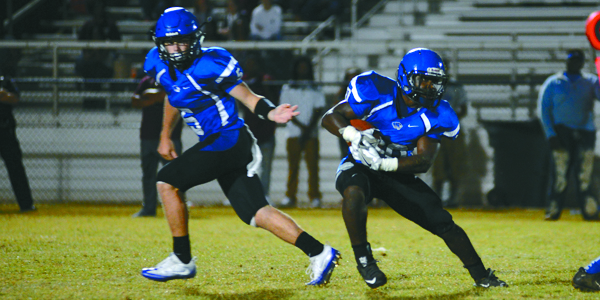 Logan McVay hands the ball to A.J. Besteder during the spring jamboree against Thomasville. The two will have to combine their forces to lead the team against a tough Hilcrest-Tuscaloosa team that boasts a pre-season top four ranking in 6A.

Just as the kids get settled back in the classrooms for their weekly lessons, the favorite pastime of citizens of the United States of America cranks right back into action here in Marengo County.

Football season is upon us and how sweet it is for the players, coaches and fans.

One can almost hear those grills firing up and the savory smell of those hamburgers and hot dogs cooking. The sound of children running around the football field and parents fussing because they’ve realized the younger ones are only at the game to run around said field.

The armchair quarterbacks are back in the stands.

“I’d ran with that. I don’t understand why on Earth he’d throw into double coverage. Put in the backup coach,” yelled that old faithful fan in the stands.

Off in the distance, a musical inclined fan can hear the marching band warming up to enter the stadium.

All of a sudden, it’s 6:45 p.m., that same marching band is playing the Star Spangled Banner and a rush of true patriotism rushes over your mind, body and soul.

This is the moment you’ve been waiting for since February. The opening kickoff of the 2016 football season.

Only one problem needs to be addressed now. Who is playing whom?

The Demopolis Tigers get the first taste of the football season playing in the 11th Annual Champions Challenge Football Classic at the Cramton Bowl in Montgomery.

DHS will meet the fourth ranked team in AHSAA Class 6A in the Hillcrest-Tuscaloosa Patriots.

Not only will the Tigers have to deal with a tough team, but Demopolis will start the season with a new backfield as Logan McVay takes the reigns at quarterback and A.J. Besteder becomes the new lead tailback.

In the Patriots backfield is Alabama commit Brian Robinson and the Tigers will have their hands full in hopes to slow down the 6-foot-2, 218-pound running back.

The A.L. Johnson Eagles will host the lone in-county regular season contest with a matchup against their rival R.C. Hatch Bobcats.

Michael Mason takes over at quarterback for the Eagles as ALJHS looks to avenge a 20-12 loss to R.C. Hatch last season on the road.

In fact, last season marked only the second win all-time for the Bobcats over A.L. Johnson who boasts a 12-2 record in the series.

The Linden Patriots will host Thomasville in a preseason contest that won’t count against the overall record one way or the other.

Sweet Water will hit the road for a jamboree as the Bulldogs will face the hosting Maplesville Red Devils and Fyffe Red Devils in a Jamboree contest.