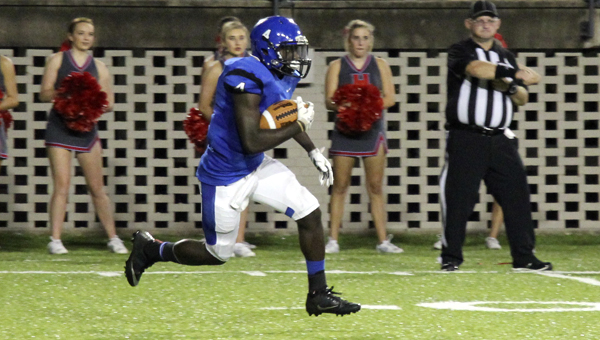 A.J. Jackson provided the only score for the Tigers during the Champions Challenge Classic in Montgomery against Hillcrest-Tuscaloosa. Demopolis looks to right the ship against old rival Greensboro.

This week they all play and the games count for the football teams of Marengo County. It’s the second week on the schedule for AHSAA and AISA, but the first regular season games for a ton of teams and four in the county.

The lights come on at Tiger Stadium as Demopolis prepares for its home opener against the Greensboro Raiders in the renewal of an old rivalry.

Also playing at home, the Marengo Academy Longhorns look to start the quest back to Troy for a fourth straight year opening the season with the Morgan Academy Senators.

In another classic rivalry matchup, the Sweet Water Bulldogs will matchup against the Thomasville Tigers on the road in Anderson Field.

The highly ranked Class 1A Linden Patriots also open on the road playing up two classes against the Hillcrest-Evergreen Jaguars.

A.L. Johnson will also be on the road as the Eagles prepare for their second game of the season meeting the Monroe County Tigers for the very first time.

Tigers preparing to renew old rivalry
The Tigers (0-1) took a tough 42-7 loss against a quality opponent in the Class 6A, fourth ranked Hillcrest-Tuscaloosa Patriots in the Champions Challenge Classic in Montgomery.

It’s a new day for Demopolis as the Tigers look forward to renewing a classic rivalry against the Greensboro Raiders this Friday at Tiger Stadium.

Although the schools haven’t met on the gridiron since 2007, Demopolis and Greensboro have played each other 73 times since 1922.

The Raiders (0-1) also started their season with a setback losing to the Minor Tigers 48-6.

Look for slot receiver Li’Cedric Varner and the two head quarterback attack of seniors Reginald Wiggins, quick and accurate, and Cedrick Tabb, powerful and stronger arm, to make an impact offensively. On defense, Kevin Lomax at defensive back and Kendrick Tubbs at defensive end will play big roles.

The Tigers are 46-24-3 all-time versus Greensboro.

Marengo Academy opens with a big test at home
While Friday night’s contest against the Morgan Academy Senators will be the first of the season for the Longhorns, the visitors opened the season last week with a huge 46-0 shutout over the Edgewood Academy Eagles.

Granted these aren’t the same Eagles that earned 71-game winning streak, the longest in the nation, but the Senators based out of Selma get the benefit of being the one’s who ended it.

Gunnar Henderson scored two touchdowns on the ground and threw another for 48-yards against the Eagles. He’s complimented in the backfield by Pierson Atchison, Taylor Jones and Micah Pitts.

Now Marengo Academy looks to be the team that beat the team and will rely on some fresh faces to lead the them this season. However, reloading is rarely a problem for the perennial title contenders.

This year the Patriots are loaded with talent on both sides of the ball and start the year ranked third in 1A and on the road against the Hillcrest-Evergreen Jaguars.

The Jaguars surprised a lot of people entering the playoffs with a 5-5 record on two straight losses and then advancing to the fourth round of the Class 3A state playoffs to finish with an 8-6.

Hillcrest-Evergreen is the fifth ranked team in 3A this year and look to running back Mikyle Dees to lead the offense.

This will be the first meeting between the two top-five teams.

The Panthers start the year with new rival
Normally, rivalry games take years to develop,
but it’s clear after trading wins the Marengo Panthers and Choctaw County Tigers, only separated by 28 miles of Alabama Highway 10, have started to develop some hard feelings for each other.

The Panthers enter the year with a ton of offensive talent left and look to improve on the one playoff win from last season and take high expectations this year.

Meanwhile, the Choctaw County Tigers managed a 4-6 season last year in a tough region and look to continue an upward climb to the playoffs for the first time since 2003.

The all-time series is 1-2 with Choctaw County taking last year’s game in overtime in Butler.

Sweet Water Travels south for classic rivalry game
The Sweet Water Bulldogs are back in Class 1A for the first time in four years and look to celebrate that return with matchup against Class 4A Thomasville Tigers in the season opener for both teams.

For the Bulldogs, the goal is to return to past glory by winning region and state titles. SWHS has the chance to do so, returning several starters on both sides of the ball who saw action in the ultra-competitive 2A Region 1.

The Thomasville Tigers started strong, but stumbled to a 6-5 record and a first round playoff exit to the hands of Dadeville thanks in part to injuries in key positions.
Senior quarterback Chad Bryant is expected to se the majority of time at the position, but don’t be surprised if sophomore Corrigan Thibodeaux sees time behind center.

These two schools have played each other 73 times since 1931 and every year since 1983. Thomasville owns a commanding 58-12-1 series edge with Sweet Water’s last win coming in 2008.

A.L. Johnson looks to bounce back on the road
After a late start due to a weather delay, the A.L. Johnson Eagles (0-1) fell in their home opener to the R.C. Hatch Bobcats 12-6 in overtime.

The Eagles will have to find a way to bounce back quickly with a road contest against the Class 4A Monroe County Tigers looming.

These are not the hapless Tigers were used to as Monroe County improved from zero to four wins under Head coach Juan Williams in his first season with the program. The
Tigers will lean on seniors De’Andre Richardson, wide receiver and defensive back, and Anthony Davis, quarterback and defensive back, to lead the squad offensively and defensively.

A.L. Johnson and Monroe County have not previously met on the gridiron.