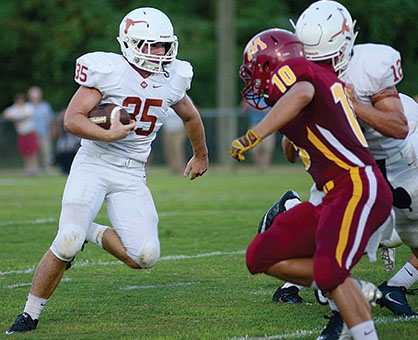 The Marengo Academy Longhorns started the season on the right foot, collecting a 42-6 victory over the AISA-AAA Morgan Academy Senators in a battle of two, top ranked AISA squads.
This victory for the Longhorns gives Marengo Academy a victory over the team that last week snapped Edgewood Academy’s 71-game winning streak.
“They’re coming and they’re on the right track. They’re going to pay somebody some misery done the road,” said Head coach Webb Tutt on Morgan Academy’s future prospects. “I’m glad we caught them early.”
Marengo Academy (1-0) got on the board first after taking a Morgan Academy (1-1) turnover down the field for a touchdown capped by a 2-yard plunge by Weldon Aydelott. Hayden Megginson would add an extra point to give the Longhorns a 7-0 lead with 2:57 remaining in the first quarter.
The home MA would take advantage of another fumble recovered by Daniel McCray with 2:21 on the opening quarter clock with a quarterback sneak by Jacob Beck to finish a 34-yard drive. Megginson’s kick proved to be good and Marengo pushed to a 14-0 lead.
Gavin Tate made his way to the highlight reel breaking several tackles on the way to a 47-yard touchdown run to push the lead to 21-0.
The Senators returned the ensuing kickoff for a touchdown, but the PAT was blocked as Morgan cut the lead to 21-6 for the visitors only score of the night.
In the second half, Aydelott would add two more scores one from 5-yards out and the other from 2-yards out to push the lead to 35-6.
Megginson capped the scoring with a touchdown run to give the Longhorns the 42-6 final score.
“It’s big for us getting our identity. I thought we were a little soft at times,” said Tutt. “We came out when we needed to finish drives. Converted some third and longs and fourth downs that really kept drives going and that’s a positive thing. Again we have a lot of things to work on. We made a lot of mistakes and mental mistakes and that’s on me.
Despite the mistakes, the win gives the Longhorns much needed momentum heading into next week.
“I’m happy for the kids. That’s a big win for us because we have a tough one next week too with Monroe (Academy) and they’re really good.”
Aydelott led all rushers with 161 yards and three touchdowns.
The Longhorns totaled 454 yards of total offense with 394 coming on the ground and held the Senators to 155 yards of total offense.
Going into the contest, Robert Tutt was the presumed starter at quarterback, however it was Jacob Beck who received the majority of snaps under center.
“He (Tutt) has to play tailback. We looked at everybody at tailback and he was our best shot. Jacob (Beck) does a good job running the offense in the Wing-T (formation).
Tutt also led the Longhorns defensively with 7.5 tackles.
Next week’s opponent, the Monroe Academy Volunteers (1-1) earned a 21-14 victory over Lee-Scott Academy and entered the week as the fourth ranked team in AISA playing at the AISA-AAA level.