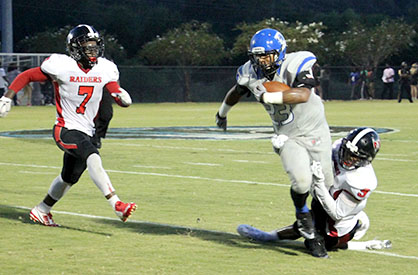 Willliam Wilkins (23) tries to power through the would be tackle by a Greensboro defender during the Tigers 42-14 win over the Raiders.

Tigers travel to Tuscaloosa for region opener
Last week, A.J. Jackson added three more touchdowns to give him four on the season in last week’s 42-14 over local foe Greensboro Raiders.

Although the game was more tight than the score indicates, the Tigers got a much needed victory and can move forward with some much needed confidence.

Demopolis (1-1) is once again loading the buses for a Class 5A Region 3 matchup against the Central Tuscaloosa Falcons (0-2).

Falcons freshman running back Javonta’ Leatherwood ran for 85 yards and wide receiver Queon Farmer scored the only touchdown on a 7-yard pass play from Aaron Hannible in Central’s 38-7 loss to Jackson-Olin out of Birmingham.

Historically, this series has been all Demopolis with the Tigers holding a 4-0 series advantage. DHS has out-scored Central 180-56 in the four games since 2010.

A.L. Johnson and Sweet Water set to clash in region battle
The first game in a series of contests between the four Marengo County teams in 1A Region 1 takes place Friday night as the eighth ranked Sweet Water Bulldogs (0-1) host the A.L. Johnson Eagles (0-2).

For the visitors, it was a tough trip to Monroeville last week as the Eagles fell 48-26 to the Monroe County Tigers. ALJHS held a 20-6 lead with three minutes to go in the first half, but four fumbles changed the fortunes of the young team.

Sweet Water enters the weekend coming off a tough 42-25 loss to Thomasville. The Bulldogs got on the board first courtesy of a 2-yard R.J. Rodgers touchdown run. However, the Tigers would score 35 unanswered points to put the contest out of reach in the first half.

The Bulldogs and Eagles have not met since 2011 where Sweet Water came away with a 49-0 victory in the that year’s version of 1A Region 1. SWHS holds a 24-5 all-time series lead.

Linden opens the region schedule at home
The Patriots powered through the hosting Hillcrest-Evergreen Jaguars 32-7 with touchdowns coming from Dequan Charleston, Deauris Jones, Isaiah Scott and the combination of Christopher Robinson to Davontae Poole for a touchdown reception.

Playing at home for the first time this season, the second ranked team in Class 1A Linden Patriots are set for a 1A Region 1 matchup against the Fruitdale Pirates (0-2).

Although the Pirates come in with two losses, after a 21-16 setback to the Pleasant Home Eagles, Fruitdale has only lost by a combined six points so far this season.

Look for the Pirates to lean on senior dual-threat quarterback Buck Weaver and tight end Peyton Brown to lead the offense against a tough and Patriots experienced Patriots defense.

Linden has dominated the series, leading 6-0 all-time against Fruitdale. In four contests as region opponents this decade, the Patriots have outscored the Pirates 250-6 with the last game ending in a 56-0 victory for LHS.

Marengo Academy hits the road for an aisa top five battle
Weldon Aydelott left his mark in the Longhorns season opening 42-6 win over the Morgan Academy Senators, rushing for 161 yards and three touchdowns.

As a team the Longhorns gained 454 yards of total offense and look to carry that momentum on the road as the fifth ranked team in AISA Marengo Academy travels to face the Monroe Academy Volunteers who are ranked fourth in ASIA playing in AISA-AAA Region 2, the same region as Morgan.

The Volunteers needed a touchdown within the final seconds to avoid overtime in a 21-14 win over unranked Lee-Scott Academy last Friday.

Quarterback Griffin McKenzie threw for 122 yards and two touchdowns and rushed for 35 more yards. McKenzie Dalton rushed for 48 yards and a touchdown. Look for Trevor Holder to be a factor along the offensive and defensive line.

Marengo Academy leads the all-time series 14-12. The two teams haven’t met since 2001 where Monroe came away with a 17-12 victory.

Marengo looks to continue dominant start
Qn the three seasons, since Head coach Eberne Myrthil took the reins, the Marengo Panthers (1-0) are 9-2 at home with the ninth victory coming in a dominant 38-0 win over Choctaw County.

Senior quarterback Cordarius Pritchett was magnificent in the contest, throwing for 147 yards and three touchdowns while running for 52 yards and another touchdown. Christion Wright hauled in three catches for 100 yards and a score and Calvin Ferguson ran for 100 yards on 21 carries. Alphonzo Lewis and Curtis Autery also scored in the game.

The Wildcats will look to the quarterback senior Michael Manuel to lead the offense and a strong defensive front to have a chance in the ball game.

Millry leads the all-time series 12-11, taking the last two games in the series since it renewed in 2014. The Panthers’ last win in the series came in 2006.