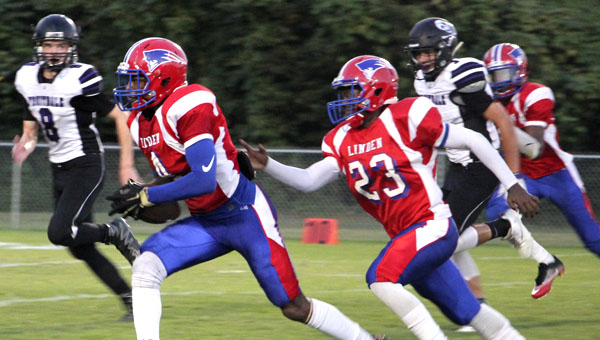 Linden senior Davontae Poole sets his sights on the endzone after picking up a punt that was blocked by teammate Kevin Green. It was the first score in what turned out to be a one-sided affair in favor of the Patriots against region opponent Fruitdale.

Big plays and stout defense led the way for the Linden Patriots Friday night as they secured their first region win of the season over Fruitdale, 61-0.

Isaiah Scott was all over the field for the Patriots, having multiple receptions for touchdowns, returning a fumble for a touchdown, kicking point-afters, and playing all-around solid defense.

“He’s a talented guy and a special player for us,” said Linden Head Coach Andro Williams. “We want to get him as many reps as possible and get him the ball. He did a great job tonight.”

Williams added that he was very proud of how his team competed, highlighting that even younger players stepped up.

“We talk to our defense about not giving up the big play, and they didn’t tonight. We also had an opportunity to play a lot of younger guys and they did a great job stepping up. It always helps your team when you can get younger guys additional reps,” he said.

After neither team accomplished much on their first possessions of the game, Fruitdale did manage to move the ball somewhat on their second, primarily with the help of an interference call. But, any hope of establishing a drive was dash when Bruce McIntosh caught the Fruitdale quarterback for a sack, forcing a punt.

The scoring began for the Patriots on that punt attempt when Kevin Green got the block. The ball was picked up by Davontae Poole who carried it about 24 yards to the end zone. The point-after by Isaiah Scott was good, giving Linden a 7-0 lead with just over four minutes to go in the first quarter.

After a three-and-out effort by the Linden defensive, Linden would get an offensive drive going, highlighted by a 17-yard run by Charles Blackmon. Deauris Jones capped off the drive with a 2-yard touchdown run. Scott’s PAT made the score 14-0 with seconds to go in the first.

The second period was all Linden. A Fruitdale fumble led to a 9-yard touchdown run by Blackmon, leading to a 21-0 Patriot lead.

Then, Fruitdale failed to convert on a fourth down conversion and on the very next play Patriot quarterback Christopher Robinson connected with Scott for a 32-yard touchdown. Scott followed with the PAT to increase the lead to 28-0.

A short punt led to the next score, which was also a one-play possession for the Patriots when Deauris Jones scampered for 27 yards to the endzone. The PAT made the score 35-0.

Things just kept getting worse for Fruitdale. Scott once again came up big for Linden, picking up a fumble and weaving his way for a 30-yard touchdown. The PAT was no good, but the Linden lead was 41-0 with 5:38 to go in the half.

But it wasn’t all for Linden in the first half as they would add one more score when Robinson once again found Scott for a 15-yard touchdown reception leading to a halftime score of 47-0.

The win lifts the Patriots to 1-0 in the region and 2-0 overall. They travel to region foe McIntosh on Sept. 9.