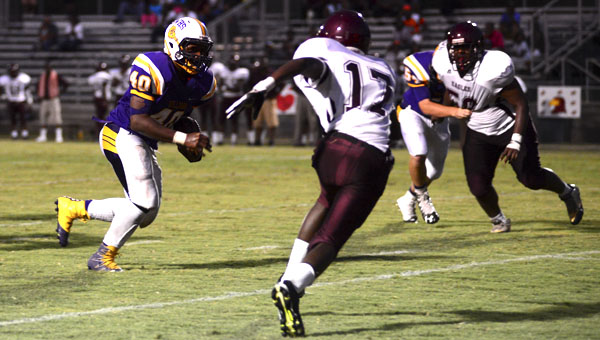 Jacory Brown (40) finds some open space in the middle of the field while Ladarious Hood (17) from A.L. Johnson gives chase.

After a slow start and a scoreless opening quarter, Sweet Water scored 21 points in the second quarter and 42 unanswered points as the Bulldogs powered through the A.L. Johnson Eagles 42-6 at Nolan Atkins Stadium on Sept. 2.

Turnovers once again doomed the Eagles as the young team lost one of four fumbles and threw two interceptions in the road loss.

Jacory Brown was the first to find the endzone with 6:43 to go in the first half on a 10-yard run.

Shamar Lewis, who finished as the leading rusher in the game with 121 yards, scored his only touchdown of the game in the third quarter on a 5-yard run.

Powerback Jaylin Johnson capped the Bulldog scoring with a 5-yard score early in the fourth quarter.

Deandre Croom found the endzone from 47-yards out with just over eight minutes remaining in the contest to avoid a shutout loss. Croom led the Eagles in rushing with 53 yards on two carries. Robin Harris had the most carries taking seven rushes for 39 yards.

Next week, the Eagles play the final of three consecutive games on the road against the Fruitdale Pirates who just took a 61-0 loss to the Linden Patriots.

Meanwhile, Sweet Water must prepare for a big time showdown with Marengo Panthers in Dixons Mills who throttled the Millry Wildcats 47-14 Friday night.