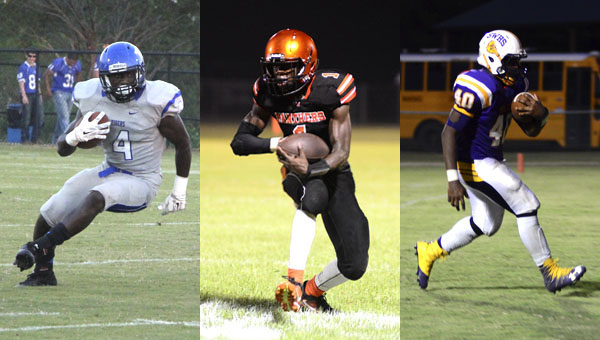 A.J. Jackson of the Demopolis Tigers, Cordarius Pritchett of the Marengo Panthers and Jacory Brown of the Sweet Water Bulldogs look to play big roles in key region battles this week.

Demopolis and Marbury take rivalry to gridiron
The Demopolis Tigers (2-1, 1-0 5A R3) cruised to a 44-0 road shutout over Central-Tuscaloosa. In the victory, A.J. Jackson added four more touchdowns to his season totaled while rushing for 136 yards on 16 carries. Logan McVay crossed the century mark on the ground as well with 101 yards and a touchdown on five carries. In all, the Tigers finished with 465 yards of offense.

This week Demopolis readies itself to host the Marbury Bulldogs (1-2, 0-1 5A R3) for the first time on the gridiron.

Marbury fell to Sumter Central 37-13 at home. K.J. Palmer led the Bulldogs with 186 yards on the ground and two tocuhdowns on 28 carries. Mason Pilgreen led the defense with 12 tackles.

While the football teams have never met, the baseball teams have met each of the previous two post seasons with Marbury eliminating the Tigers in 2015 and Demopolis earning retribution in 2016.

Marengo hosts Sweet Water in key region battle
Rarely are games this early in the season classified as “must win,” but that is the case when the Marengo Panthers and the Sweet Water Bulldogs meet in
Dixon Mills in a Class 1A Region 1 game.

Marengo (2-0, 1-0 1A R1) enters the contest after a monster win over the Millry Wildcats where the Panthers racked up 525 yards of total offense in the 46-16 victory.

Cordarius Pritchett finished with 147 total yards with two touchdowns on the ground and another through the air to lead the Panthers in the victory.

Shamar Lewis led the Bulldogs with 121 rushing yards and a touchdown. SWHS piled up 372 yards of total offense in the victory.

Despite being so close in proximity, the Panthers and Bulldogs haven’t played each other since 2011 which ended in a 56-0 victory for Sweet Water. The Bulldogs lead the all-time series 16-6.

Longhorns look to return to winning ways in region opener
Marengo Academy (1-1) fell on the road 28-14 to a larger school in AISA-AAA Monroe Academy.

Robert Tutt completed his only pass attempt for a touchdown to Gavin Tate while rushing for 79 yards and Hayden Megginson scored the other touchdown on the ground.

The Longhorns dropped to eighth in the Alabama Sports Writers Association weekly poll following the loss.

This week the Longhorns return to Linden Athletic Field to host the Southern Academy Cougars (1-1) in the AISA-A Region 2 opener for both squads. The
Cougars fell 40-14 to Jackson Academy in Greensboro.

While Southern Academy leads the all-time series at 8-7, the Longhorns have won the last two meetings including a 40-0 win in 2013.

Linden travels down Highway 43 to face the Demons
There’s only one word to describe Linden’s 61-0 win over Fruitdale and it is dominant.

The Patriots (2-0, 1-0 1A R1) scored 33 points in the second quarter as part of a 47-point first half. The big lead allowed for most of the Linden roster to see game action during the home contest.

The second ranked team in Class 1A, Linden owns a 6-2 record against McIntosh with the last meeting going the way of the Patriots 41-0 in 2013.

A.L. Johnson clawing for first win of season
The Eagles could not get on track offensively during the 42-6 road loss to Sweet Water. However, Deandre Croom found his way to endzone on a 47-yard score.

The Eagles hold an 11-7 all-time series lead, but lost the last meeting which was a first round matchup in 2014 that Fruitdale won 33-23 at home.