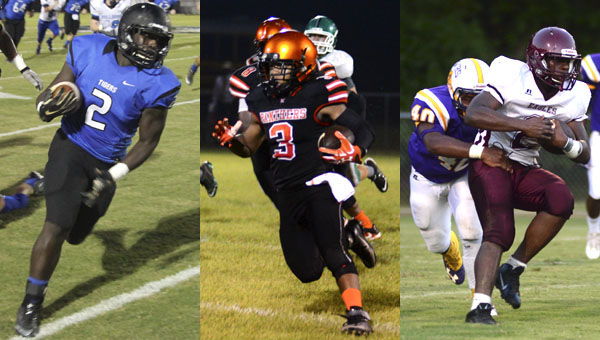 Tyler Jones (2) and the Demopolis Tigers head on the road to face a tough Calera Eagles squad. Alphonso Lewis (3) and the Marengo Panthers travel to face Johnny Robertson (2) and the A.L. Johnson Eagles.

Tigers face tough region challenge
One thing a coach will never say is a game doesn’t matter, but when it comes to postseason concerns some games don’t matter.

The Tigers enter the contest coming off another impressive victory, defeating the Marbury Bulldogs 49-7.

Logan McVay was nothing short of magnificent last Friday scoring four total touchdowns including an interception return for a score. Freshman Tyler Gamble made his presence felt running for a 99-yard touchdown shoeless on his way to 154 rushing yards. Erin White led the charge on defense with two solo tackles and four assists. Tavian Brown had two solo tackles and three assists.

Led by former Alabama quarterback now head coach Andrew Zow, Calera enters the contest as the eighth ranked team in the most recent

Alabama Sports Writers Association (ASWA) poll and coming off a 45-22 victory over Central-Tuscaloosa.

Calera racked up 452 yards, 245 passing and 207 rushing, in a balanced offensive attack. Quarterback Jermaine Ross threw for 245 yards. Yatil Gant caught 133 of those yards and a touchdown. Decorean Mickens led in rushing with 76 yards and a score.

Meeting for the third time ever, Demopolis holds a 2-0 series lead against the Eagles. Last season, The Tigers took a home 42-23 victory over Calera in what was then a 5A Region 4 contest.

A.L. Johnson and Marengo High renew rivalry in important region contest
Rivalry games are always hotly contested, but when postseason implications are on the line the games are elevated to another level.

The Eagles and Panthers clash Friday night and it will be a high stakes battle.

It was a much needed win for the Eagles as the young team had struggled with turnovers in key moments, costing the squad vital momentum that quite possibly could have yielded a different record at this point in the season.

Tied at 14-14 coming out of halftime, the Panthers offense was never able to gain any traction in the second half until a last minute touchdown pass from Cordarius Pritchett to Christion Wright ended a Sweet Water scoring run.

Pritchett finished with 107 yards passing and a touchdown reception.
Marengo High has not played any one team more than it has A.L.

Johnson and while the Panthers own a 24-16 series win, the Eagles own victories in three of the past four meetings. MHS won a tight 40-38 thriller last season in Dixon Mills.

Sweet Water hosts J.F. Shields
So far, it’s been a fantastic return to Class 1A football for the Bulldogs (2-1, 2-0) after using a strong second half to defeat the Marengo Panthers 33-22.

Sweet Water amassed 423 total yards in the victory with 289 yards rushing and 134 yards through the air.

Jonah Smith threw two touchdowns and ran for another in the victory. Shamar Lewis ran for 109 yards and a touchdown on 13 carries. Jaylin Johnson also pounded out 94 yards and score on a team high 15 carries.

The J.F. Shields Panthers (0-4, 0-2) have not had much success this season and have been out-scored 251-6 so far this season. The Panthers most recent outing was a 73-0 loss to Millry.

With a matchup looming with Linden in two weeks, this game would be an easy one to look over, but it is incumbent for the eighth ranked in Class 1A Bulldogs to not overlook J.F. Shields and avoid the upset.

Sweet Water is 5-0 all-time against the visiting Panthers taking the last meeting 56-0 in 2009.

Linden and Millry set for region matchup
The Patriots (3-0, 2-0) come into the weekend ranked second in Class 1A and look to continue their winning ways when they host the Millry Wildcats (1-2, 1-1) in a 1A Region 1 contest.
Last week, Linden traveled to McIntosh and trounced the Demons 69-0 to give Head coach Andro Williams his 100th career victory.

LHS has been nothing short of dominant all season, out-scoring opponents 162-7 with the seven points coming from Hillcrest-Evergreen who recently fell out of the Class 3A rankings.

Millry heads to Linden Athletic Field after collecting its first win in a 73-0 victory over J.F. Shields.

Until that victory, Millry struggled on offense falling 35-0 to Washington County, ranked seventh in Class 2A and suffering a 47-14 setback to Marengo.

Friday is the first meeting between the two teams since 2007, where the Patriots claimed a 43-6 victory in the second round of the Class 1A playoffs. However, the Wildcats lead the all-time series 3-2 with all wins coming in the ‘90s.

Marengo Academy faces a new foe in region game
The Longhorns (2-1, 1-0) take the road for a AISA-A Region 2 against the North River Christian Chargers (0-3, 0-1) for the first time ever.

Ranked seventh in the ASWA AISA poll Marengo Academy heads to the Tuscaloosa based private school with plenty of momentum following a 48-0 shutout over Southern Academy.

The Longhorns gained 383 yards of offense with 292 yards coming through the running game. Megginson lead the charge on the ground with 107 yards and two touchdowns.

Devin McCray led the defense with seven solo tackles and five assists. However, Jacob Beck made his presence felt defensively with a 55-yard fumble recovery touchdown and a 66-yard interception return for a score.

North River Christian has spent the majority of its years playing eight man football with exceptions coming in 2006 and 2008 where the Chargers played in the AISA-A division.

So far it has been a rocky return to 11 on 11 competition with the Chargers being out-scored 132-12 with losses coming to Pickens Academy, Patrician Academy and South Montgomery Catholic, which gave SMAC its first win in 20 tries.