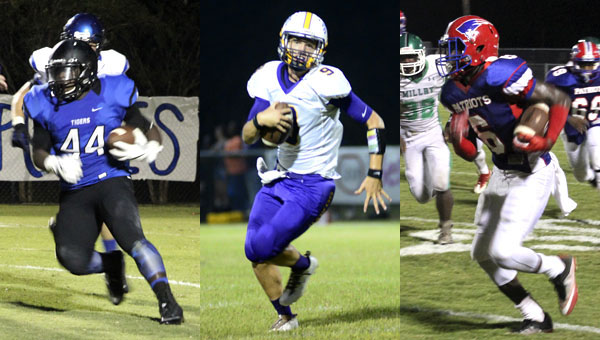 Tigers return to action at home
After a Friday off, the DHS Tigers (3-1, 3-0) return to action with Class 5A Region 3 opponent Dallas County (2-3, 1-1) at Tiger Stadium Friday night and can clinch a playoff berth in the process.

Last time the Tigers to the field, Demopolis ran passed the Calera Eagles 38-13 posting big second have numbers. Ran passed is a literal interpretation of how the game went as DHS piled up 366 of 377 yards on the ground headed by a trio of players who crossed the century mark with Logan McVay carrying the rock 15 times for 124 yards and two scores, A.J. Jackson going for 101 yards and a touchdown and A.J. Besteder also going for 101 yards and two scores.

Dallas County limps into Friday’s game after the Hornets took a beat down by the top ranked team in Class 1A Maplesville 52-14 at home.

The Hornets defense struggled while giving up 597 yards to the Red Devils offense. However, Dallas County did hold a brief lead in the first quarter when Calvin Starks scored from 16-yards out. Octavious Palmer connected with Darrell Moorer for a 52-yard touchdown in the second quarter to cap all of the Hornets scoring on the long night in Plantersville.

Class 5A eighth ranked Demopolis has never lost to Dallas County with the Tigers holding a 15-0-1 record against the Hornets. That tie in 1973 was the closest game in the series as DHS has outscored Dallas County 629-122 all-time.

Sweet Water and Linden meet for control of the region
The titanic clash everyone has been waiting for since Alabama High School Athletic Association announced reclassification earlier this year has finally arrived as the Sweet Water Bulldogs return from a Friday off to take on the red hot Linden Patriots in a battle for control of Class 1A Region 1 in a battle of Class 1A top five programs.

The Bulldogs (3-1, 3-0), ranked fifth in 1A, aren’t lacking in confidence or swagger in their own right, winning three straight games after dropping the season opener to Class 4A Thomasville.

Last time out, the Bulldogs throttled J.F. Shields to the tune of a 69-0 victory in which SWHS piled up 323 yards of total offense while holding the hapless visitors to 39 total yards.

Leading the charge for the Bulldogs was Xavier Lucy who rushed for 115 yards with two touchdowns. R.J. Reynolds went for 63 yards and added two touchdowns as well. Jonah Smith connected on two touchdown passes, one Jaylin Johnson for a 33-yard score and the other to Will Huckabee for 24 yards.

Defensively, Trent Sams returned an interception for a touchdown in the second quarter. Damion Young got the scoring started with a return on the opening kickoff.

Hosting the Bulldogs for the first time since 2011, Linden (5-0, 3-0), ranked second in 1A, enters after scoring a monster 60-14 victory over then seventh ranked in Class 2A Washington County.

The Patriots employed a ground game that churned out 386 yards. LHS finished with 475 total yards.

Charles Blackmon came away as the statistical leader for taking seven carries for 232 yards and two touchdowns. Xavier McIntosh scored three touchdowns, each going for one yard. C.J. Robinson scored a rushing touchdown and tossed a 70-yard pass to Isiah Scott for another score. Deantonio Williams and Johnathan Biggs also found the endzone for the Patriots.

Linden’s defense was just as dominant as the offense, holding WCHS to just 168 yards of total offense and limiting the running game to 75 yards.

The Patriots have compiled a 34-27-3 record in their favor against Sweet Water. The on and off again rivals last met in 2011 where Linden collected a 25-14 victory in the second meeting of that calendar year. The Bulldogs did dominate the previous decade of the rivalry winning every game from 2002-2010.

A.L. Johnson looks to stay on winning track
After soaring to a 60-0 homecoming victory over Ellwood Christian, the A.L. Johnson Eagles (2-4, 1-2) look to continue to fly high on the road in a Class 1A Region 1 game against the J.F. Shields Panthers.

Michael Mason made his presence felt in the victory finding the endzone twice, the first on a 36-yard pass to Dellvontae Pettway, one of two scores on the night for Pettway, and again on a 92-yard run. DeAundra Bridges also made his presence felt scoring three touchdowns with two coming on runs of 8 yards and 40 yards and the other on defense for a 25-yard score. Lonnie Henton, Jr. and Leo Baker also found the endzone for ALJHS.

Playing with a team of 16 players, the Panthers have been outscored 375-14 on the season and have given up at least 50 points in each game this season and in nine consecutive games which ties a state record set by R.C. Hatch in 1999 and 2000.

Marengo High set to conclude stretch of road games
For the third time in as many weeks, the Marengo Panthers (3-2, 2-1) will be on the road, this time heading to meet the Fruitdale Pirates (2-4, 1-2).

Needing to matchup against a quality non-region opponent, the Panthers traveled to Mobile Christian and came up in a losing effort 34-6 to the Leopards.

Cordarius Pritchett scored the lone points for MHS in the third quarter on a quarterback run to cut the lead to 27-6 at the time.

As a team, the Panthers totaled 167 yards of offense while giving up 261 yards to the highly ranked Class 3A squad. Quindaris Ausbon led the team with two receptions for 71 yards and accounted for 88 total yards in the loss.

The Panthers have a significant opportunity to bounce back against Fruitdale. The Pirates are somewhat on a roll winning their last two games, however those teams have a combined 1-9 record amongst them as McIntosh sits at 1-4 and Choctaw County is 0-5.

Marengo and Fruitdale have met as region in every matchup between the two schools and have played each year since 2000. The Panthers own a 11-7 series advantage over the Panthers, winning last year’s battle 26-20.

Marengo academy travels across the tombigbee for region affair
MA (4-1, 3-0) hits the road for a AISA-A Region 2 game against the Sumter Academy Eagles (0-5, 0-2).

It always feels good to defeat a rival and the Longhorns did just that in a 35-7 win over Patrician Academy last Thursday at the Linden Athletic Field.

Weldon Aydelott played a phenomenal game from the running back position taking 21 carries for 214 yards and four touchdowns.

As a unit, the Longhorns accounted for 351 yards of total offense with 335 coming on the ground. Defensively, MA gave up 211 passing yards, but stuffed the Saints ground game only allowing 53 yards rushing for a total of 264 yards.

Despite giving up the yards through the air, the Longhorns feel they can get those issues corrected as they march towards a highly anticipated contest against South Choctaw Academy on Oct. 21.

However, Marengo Academy is not looking passed the Eagles despite the winless record.
Last week, Sumter Academy fell at home 48-30 to South Montgomery Christian Academy in a non-region contest.

The Eagles gave up 338 yards on the ground in the loss.
On the season, Sumter has been outscored 221-50 and have only given up under 50 points once which was in a 26-12 loss to Wilcox Central, the closest game of the season so far for the Eagles.

The Longhorns hold a commanding 31-11 all-time series advantage in the matchup of institutions in neighboring counties. MA won the last meeting between the two 47-7 in 2013.