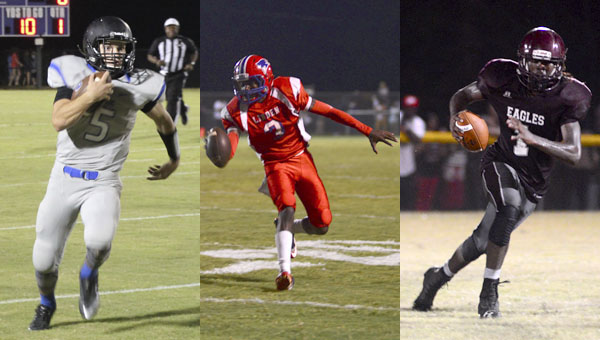 Demopolis hosts Sumter Central for homecoming while Linden travels to A.L. Johnson in a rivalry matchup.

It’s homecoming week for the football team and fans alike in Demopolis as the Tigers prepare to host their neighbors in the Sumter Central Jaguars from just across the Tombigbee River in a Class 5A Region 3 game.

The Tigers once again leaned on an impressive run game, amassing 243 rushing yards. A.J. Jackson led with two touchdowns and 85 yards on 19 carries, but William Wilkins did more with less taking 11 carries for 119 yards and a score. Quarterback Logan McVay went 4-of-8 for 70 yards, including a 28-yard touchdown pass to Tyler Jones.

Sumter Central (2-5, 2-2) may not be as hot as Demopolis coming into the contest, but the Jaguars are as hungry as ever and are till competing for a spot in postseason competition and are coming in after a 37-19 win over Central-Tuscaloosa.

While statistics from the contest weren’t readily available, a standout player from the contest and on the season for Sumter is defensive end/linebacker Markeous Mcgraw who flies to the ball rather he starts starting on with his hand on the ground.

Demopolis hasn’t lost to a team from Sumter County since 1993 losing to the then Sumter County Wildcats. Since SCHS and Livingston High School merged into Sumter Central, the Tigers are 4-0 against the Jaguars including last year’s 35-6 victory in Livingston.

Demopolis is ranked eighth in Class 5A and is making its third consecutive appearance this season in the Alabama Sports Writers Association poll.

The only game in the county that isn’t a homecoming contest is between Highway 28, in-county rivals as the Linden Patriots travel to face the A.L. Johnson Eagles.

For LHS (6-0, 4-0), the idea of a perfect regular season is not too far in the distance and if the Patriots can finish October with two more wins against the county rivals the dream should be realized.

Last Friday, Linden started the slate of Marengo County teams with a win over the Sweet Water Bulldogs at Linden Athletic Field 35-7.

The Patriots, ranked second in class 2A entering the week, used a dominant ground game running for 293 yards to dispatch of SWHS in a game that was closer than the final score indicates.

Not only that, but LHS also had contributions from multiple players in the victory. Dequan Charleston lead the way for LHS with 93 yards on nine attempts. Xavier McIntosh scored two touchdowns and gained 65 yards on 10 carries. Deauris Jones took his only carry for a 1-yard score. Quaterback C.J. Robinson completed 6 of 13 passes for 115 yards, two touchdowns and an interception. Davonta Poole caught one of those touchdowns for 14 yards and finished with three receptions for 38 yards. Isaiah Scott caught the other for a 38-yard score and his only reception.

The A.L. Johnson Eagles (3-4, 2-2) enters the rivalry matchup wins of three out of the four last games after dispatching of J.F. Shields 58-0 down in Beatrice in a Class 1A Region 1 affair.

ALJHS has done its part in winning the games needed to stay in playoff contention and currently sit in fourth place in the region.

Despite what happens against Linden, the Eagles will still control their own destiny when it comes to the postseason with games versus McIntosh and Millry looming to close the season.

Aside from a three-year hiatus from 1980-1981, these teams have played every year since 1977 and the series is overwhelmingly in favor of Linden with the Patriots leading the all-times series 30-7.

Homecoming week for the orange and white Longhorns of Linden and Marengo Academy looks to continue the march to another region championship as Wilcox Academy comes in for a AISA-A Region 2 game.

Weldon Aydelott didn’t work a lot against the Eagles, but when he did he found the endzone taking two carries 108 yards and two touchdowns. Jacob Beck, Gavin Bowden and Hayden Megginson all scored rushing touchdowns for the Longhorns while Robert Tutt and Landon Houlditch connected for a 25-yard score through the air.

The Longhorns didn’t waste much time trying to put away Sumter Academy, scoring 35 points in the first half and finished with 388 yards of total offense for their troubles.

While not much is known about the statistical leaders for the visiting Wildcats, it is worth noting that Wilcox is undefeated at 2-0 on the road the season and would love to play spoilers for the Longhorns homecoming festivities while still fighting for a playoff spot as the season winds down.

Aside from seven years since 1982, these teams have been consistent opponents to one another and the all-time series leans slightly in favor of Marengo Academy with the Longhorns holding a 15-12 series edge. MA won last year’s meeting 41-22 in Camden.

After a finishing a three game road stretch where the Panthers went 2-1, Marengo High is going with a literal homecoming and homecoming celebration as well this Friday when J.F. Shields comes to Dixon Mills for a Class 1A Region 1 affair.

While it wasn’t as big of a win as the Panthers would have hoped, the win keeps Marengo in line to force a possible tiebreaker scenario for the region championship with a date against the Linden Patriots looming on Oct. 14.

The Panthers are 2-1 at home and would like nothing more than to get the homecoming win for all of the returning alumni coming back to Panther Stadium.

J.F. Shields (0-7, 0-4) is more or less looking forward to this season coming to a close in the tough region after officially being eliminated from postseason contention following a 56-0 loss to A.L. Johnson.

Small in number of players, J.F. Shields has struggled to stop many teams on defense being outscored 433-14 on the season. The Panthers of Beatrice have yet to surrender a score under 54 points in a game this season.

Marengo High leads the all-time series 14-10 and has won seven straight matchups dating back to 2005 including last year’s 60-8 victory.

Sweet Water honors the past and celebrates homecoming

It’ll be a week of festivities in Sweet Water as the Bulldogs prepare for homecoming game celebrations while hosting the McIntosh Demons Friday night at Nolan Atkins Stadium in a Class 1A Region 1 game.

Shamar Lewis led the way for Sweet Water with 76 yards and the only touchdown on 13 rushing attempts and made a great interception undercutting a Robinson pass.

While the score didn’t end up being close, the game was tightly contested, but the Patriots were able to take advantage of turnovers and pound the game away.

Entering the week as the eighth ranked team in Class 1A, the Bulldogs have the chance to clinch a playoff berth with a win to cap homecoming week.

McIntosh (1-5, 1-3) haven’t had much success this season and weren’t able to hang with Washington County foe Millry coming away with a 55-13 loss.