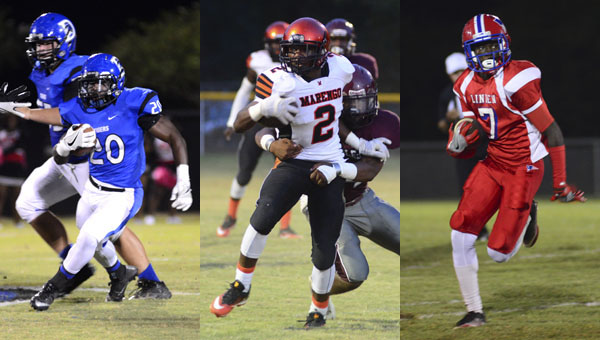 Demopolis travels to Enterprise for a top ten, interclass battler. Marengo and Linden will meet with the 1A Region 1 title on the line.

Demopolis High School (6-1), winners of five straight, have already clinched the 5A Region 3 crown with three weeks to spare in the regular season thanks to a 45-14 victory over Sumter Central.

Now the Tigers, ranked sixth in the latest Alabama Sports Writers Association (ASWA) Class 5A poll,  look to take their ground and pound game to Enterprise to take on the Wildcats (7-1) Friday night.

Logan McVay scored three touchdowns in the game, two in the fourth quarter to put the game on ice.

Enterprise is playing their second of three home games to close the season after dismantling Class 7A Region 2 opponent Smiths Station (1-7) 52-7.

The contest will be the first meeting between the two schools on the gridiron.

Linden hosts Marengo for homecoming and the region crown

With merely 19 miles separating the two schools, one would think that there would be a longer history of clashes between Linden and Marengo.

However, these schools have only met 28 times ever on the gridiron since 1979.

The 29th meeting between the Panthers and Patriots may be the biggest of them all as it serves as homecoming for Linden and a chance for an outright Class 1A Region 1 championship. Meanwhile, Marengo High has a chance to force a three-way log jam at the top of the region standings and claim a share of the crown.

Last week the Patriots (7-0, 5-0) handled business last week with a 73-0 victory over A.L. Johnson. In the victory, Linden racked up 843 yards of total offense while limiting the Eagles to just 86 yards of offense and nine turnovers.

MHS (5-2, 4-1) handled business as well last week with a 68-0 decimation of a depleted J.F. Shields team in Panthers Stadium during homecoming festivities.

These teams last met in 2013 as region opponents where Linden took a 39-14  victory on the road. The Patriots lead the all-time series 18-10.

Linden enters the weekend still ranked second in the Class 1A ASWA poll.

After a tough loss against a strong Linden team, A.L. Johnson (3-5, 2-3) looks to bounce back against a struggling McIntosh Demons (1-6, 1-4)  squad in an important 1A Region 1 game for the Eagles.

As stated earlier, ALJHS struggled on offense and was held to 86 total yards while turning the ball over nine times against Linden.

However, McIntosh didn’t fare any better and was held to negative 8 yards in a 67-0 loss to Sweet Water last week.

This contest is an important one for the Eagles as a win would keep A.L. Johnson alive in the race to secure the final seat in the playoffs in the region.

These teams last play in 2013 as region opponents where the Eagles took home a 56-20 victory. ALJHS leads the all-time series 7-3.

Longhorns step out of region for road trip

Hayden Megginson and Gavin Thompson provided 171 of  257 rushing yards to lead the Longhorns. Megginson took six carries for 94 yards and two scores while Thompson carried 10 times for 77 yards and a touchdown.

The Alabaster, Alabama based Evangel Christian Lightning (7-0) traditionally play 8-man football, but have defeated both 11-man teams they’ve played this season with wins over Patrician and Cornerstone.

This interesting road contest will be first ever meeting between the two schools.

Sweet Water continues to romp through the competition in Class 1A action with a 67-0 shutout of McIntosh.

Dominant is the nicest way of describing the Bulldogs mauling of McIntosh, as SWHS (4-2, 4-1) piled up 345 yards of total offense and limited the Demons to negative 8 yards.

Xavier Lucy ended as the most efficient Bulldog taking three carries for 117 yards and three touchdowns. RJ Rogers rushed for 85 and a touchdown on five carries. Kaleb Greene, Jonah Smith, Will Huckabee and Shamar Lewis all scored a rushing touchdown. Lewis was also on the receiving end of a 43-yard pass for a touchdown from Smith.

The ninth ranked team in Class 1A forced two interceptions, one by Trent Sams and the other by Braiden Broussard to help push to victory.

The game isn’t a must win for the Millry Wildcats (3-4, 3-2), but a win would clinch he final playoff spot for 1A Region 1 and make next week’s game against A.L. Johnson a little less meaningful.

Simply put, Millry has not been competitive against any team that has a shot of going to the playoffs with only 20 points scored in the four losses while giving up 177 combined points in the losses.

History favors Sweet Water in the matchup as well as the Bulldogs own a 23-4-1 series advantage.