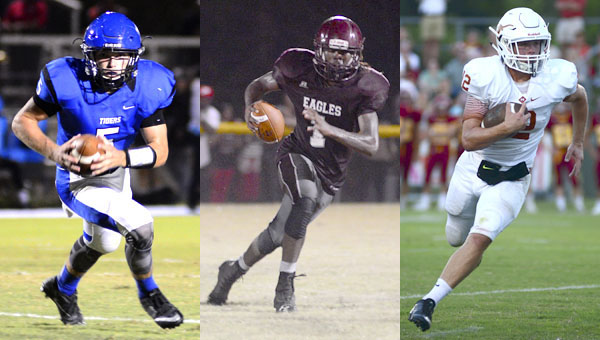 With the regular season winding down, the Demopolis Tigers (6-2, 5-0) aspire to leave their final mark on Class 5A Region 3 and collect a third consecutive unblemished record in region competition with a win on the road against the Jemison Panthers (3-5, 2-3).

Last week the Tigers fell on the road to Class 7A Enterprise, 42-0. The hosting Wildcats were ranked in the Class 7A top ten by the Alabama Sports Writers Association (ASWA).

Demopolis is a perfect 4-0 against Jemison including a 70-0 victory last season at Tiger Stadium.

A.L. Johnson hosts Millry in a winner take all contest

After a grueling nine weeks of football for A.L. Johnson and eight weeks for the Millry Wildcats, it comes down to the final week of region play to determine who will be the final qualifier in 1A Region 1.

In normal circumstances, the game would’ve been a shutout, but on this night Eagles Head coach Johnney Ford wanted to do something special.

Up 50-0 with 39 seconds left, Ford had his team intentionally fumble on McIntosh 20-yard line and allow a senior, special needs player for the Demons score a touchdown to end the homecoming contest. Instead of worrying about a shutout, Ford and the  Eagles instead decided to put a young make an impact on a young man’s life, which is one of the goals of high school athletics.

The schedule makers got it perfectly correct when the pairing of Marengo Academy and South Choctaw Academy was set for the end of the regular season as this contest will decide the AISA-A Region 2 champion.

MA has won 20 of 24 meetings in this series that has been off and on since 1970 and have won every game this decade including last year’s game 41-6.

Marengo and Mcintosh set to duel in Dixon Mills

It’s senior night for the Marengo High (5-3, 4-2) and the Panthers are looking to recapture momentum heading down the stretch against the McIntosh Demons (1-7, 1-5) to close the Class 1A Region 1 slate.

The Panthers fell 58-22 in Linden and look to redeem themselves in what could be the final home appearance for this senior class.

Sweet Water dispatched of the lowly Millry Wildcats 41-6 last week in a game that saw Shamar Lewis run for 226 yards and three touchdowns.

With the second seed in 1A Region 1 clinched regardless of outcome, the Bulldogs will look to stay healthy and sharp on offense as the season win.

Linden piled up 399 total yards of offense in the 58-22 victory and limited Marengo High to 194 yards, mostly in the air.

The Patriots are 8-1 all-time against J.F. Shields and this is the first meeting since 1997.