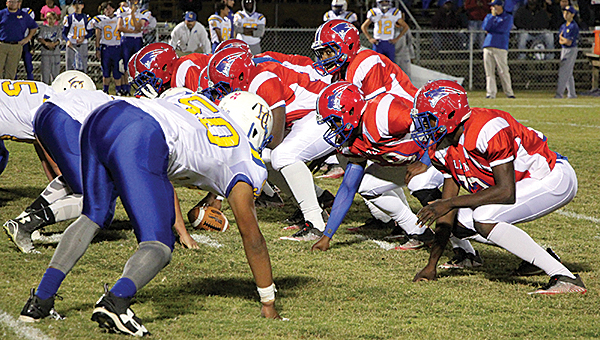 The Linden Patriots picked up where they left at the end of their perfect regular season with a strong defensive and offensive showing against Houston County, 77-7.
The Patriots were strong in all facets of the contest. The team gained a total of 599 yards, including 398 rushing yards on 39 attempts. The leading rusher in the game was Deauris Jones with 80 yards and a touchdown on only four carries.
The passing game was hitting on all cylinders as well, with quarterback Christopher Robinson going 7-of-8 for 201 yards and three touchdowns. Dequan Charleston was the biggest target of the night, pulling down four receptions for 126 yards and three touchdowns.
Leading the defense was hard-hitting Bruce McIntosh with eight tackles.
“Our team played well. There were times when they didn’t play with the maximum energy we needed and wasn’t as physical as we know we can be. But, I’m proud of how they played overall. We just have to make sure to play with energy at all times,” said LHS Head Coach Andro Williams.
LHS scored quick and often early in the game. Charles Blackmon, another running back who had a stellar night, scored the first touchdown of the night. He would score the next touchdown as well, this time as a receiver.
The Patriots continued to pile on the touchdowns, scoring a touchdown in each possession of the first half to take a 42-7 lead in the half.
Williams said his team would need to continue working hard and not focus on past successes.
“This time of the year is about working hard and doing what you have to do to advance,” he said. “We talk to our kids about working at a high level during practice. We have experienced guys who will know how to handle games, regardless of the score.”
Linden will travel to take on Notasulga in round two of the 1A playoffs next Friday night.