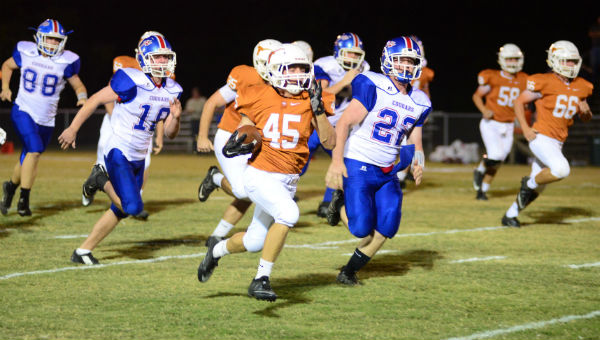 Cameron Peppenhorst broke free for the first touchdown on the first play and the Longhorns were off to the races in the playoff victory.

“We didn’t know really what to expect from them. The first quarter lasted forever,” said Marengo Academy Head coach Webb Tutt. “We scored the first three times we touched the ball and went up 20-0. That just put them behind the eight ball and caused us to gain some momentum. We were able to go into half up big. I was pleased with that and we got to play everybody.”

After the defense forced a punt, Cameron Peppenhorst ran 44 yards on MA’s first offensive snap of the game to put the home team up 6-0.

Gavin Tate followed that up with 8:57 on the first quarter clock catching a 48-yard pass from Jacob Beck. Weldon Aydelott converted a two-point try and the Longhorns went up 14-0.

Hayden Megginson made it three for three on the next drive taking a 10-yard run for a score to go up 20-0. The short field was setup by a Landon Houlditch strip and fumble recovery by Aydelott.

With 6:44, Aydelott found the endzone for a touchdown from four yards out and then converted the extra two points to put the Longhorns up 28-0.

Gavin Thompson went back to back for touchdowns scoring on a 32-yard run toward the end of the first and then on a tough 3-yard on fourth down in the second quarter to extend the lead to 40-0.

Megginson scored all the final points for Marengo Academy with a 63-yard run in the second quarter with just over six minutes left and then in the third on a 12-yard and a converted PAT put the score at 53-0 for MA.

With the big halftime lead, both teams agreed to running clock, but that didn’t stop Crenshaw from trying and with 4:31 left in the game Quashun Laprade scored on a 40-yard against the Longhorn reserves and Cole Roper’s PAT gave the game the 53-7 final.

“The good thing about this year is we’ve had to play (starters) most of our games, so we’re in pretty good shape,” said Tutt. “Physically and mentally we should be fine, because we’ve had to play.”

The Longhorns pounded Crenshaw for 307 yards on the ground and 369 total yards, while limiting the Cougars to 117 total yards, mostly in the second half, and forcing three turnovers.

With one win in the books, the Longhorns are set to host the winner of South Choctaw Academy and Abbeville Christian with the winner making the trip to Troy to play for a state championship.