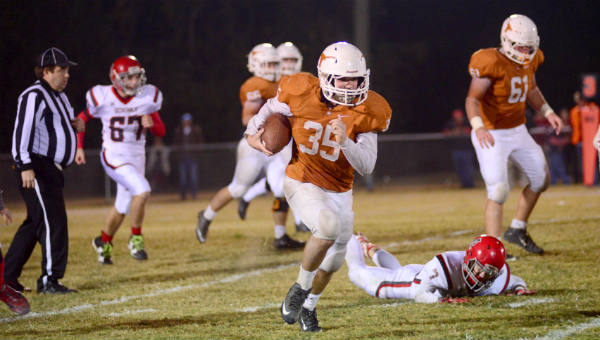 Weldon Adyelott breaks free for a bug run against Abbeville Christian in the Longhorns’ 42-17 win to advance to the AISA-A Championship game. The senior running back finshed with over 200 yards rushing.

The Marengo Academy Longhorns once again unleashed their brand of physicality to the tune of 316 rushing yards to defeat the Abbeville Christian Generals 42-17 on Nov. 11 in Linden and advance to the ASIA-A Championship Game in Troy next Friday.

The Longhorns (10-1) totaled 447 yards as an offensive unit, but it was the physical tone MA set that made the difference on both sides of the ball.

“I told them before the game that it was going to be a physical football game and I thought the longer it went it would be to our advantage,” said MA Head coach Webb Tutt. “They have a good football team. They spread us out and hit us with some stuff that hurt us. They had some speed that we didn’t do a good job of tackling at some points.”

Weldon Aydelott was a problem for the Generals on both sides of the ball. The senior running back finished with 30 carries for 202 yards and four touchdowns while leading the defense with eight tackles and a sack.

Jacob Beck also made his presence felt defensively with two interceptions including a taking one to the house for a 36-yard touchdown. Austen Day and Daniel McCray collected interceptions for the Longhorns.

Abbeville Christian took an early lead when Brody Tyler connected with Devon McCree for a73-yard touchdown as the Generals went up 7-0.

Aydelott scored the first 14 points for the Longhorns with a 57-yard run and then for a 3-yard touchdown and a two-point conversion to put MA up 14-7 with 2:31 left in the first.

Abbeville tried to recapture some momentum when Robert Miller blocked a punt to allow Garrett Fenn to rumble 52 yards and put the Generals back on top 17-14.

Aydelott then scored two more in the second on runs of 9 yards and 2 yards with the second as time expired in the first half as Marengo Academy took a 28-17 lead to the half.

“He’s a work horse,” said Tutt of the senior running back.

The Longhorns needed one more score to put the game on ice and after Day’s interception with 6:21 in the third quarter, MA got that score with 2:03 on the clock when Beck connected with Daniel McCray for a 15-yard touchdown. Hayden Megginson connected on his third PAT to push the lead to 35-17.

Beck then ended all hopes of a comeback for Abbeville with a 36-yard interception return for a touchdown as MA took the final 42-17 spread for the victory.

“Once we got the big lead it got them where they had to throw the ball and we know what they were doing,” said Coach Tutt.

The win served as the final home game for 13 seniors who will finish their careers one way or another in Troy.

“They’re such good leaders and they just refused to quit and I depend on them,” said Tutt.

The senior class only lost one home game in their time as Longhorns which was a 28-6 loss to Bessemer Academy to start last season.

This is the Longhorns’ fourth consecutive trip to Veterans Memorial Stadium for a shot at a state championship. After winning in 2013, MA fell short in consecutive years to Edgewood Academy.

“The kids are used to going, so it’s nothing new to us. We just have to find a way to finish the deal this year,” said Tutt.

Kick-off for the game against Chambers Academy (12-0), who defeated Lowndes Academy 41-16 to reach the title game, is scheduled for 12 p.m. on the campus of Troy University.