Linden cruises past Georgiana into fourth round of playoffs 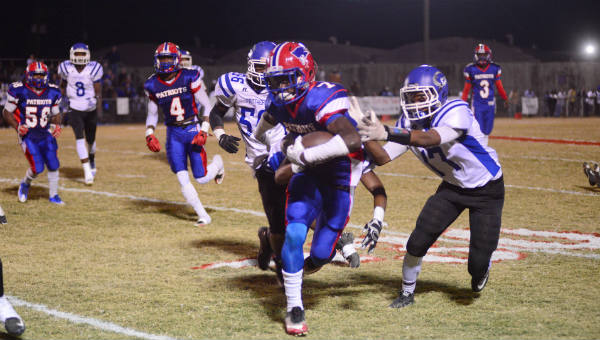 DeQuan Charleston scored five touchdowns in Linden’s win over Georgiana to advance to the fourth round of the Class 1A AHSAA playoffs.

The Linden Patriots used all three phases of the game making the most of opportunities on offense, defense and special teams to defeat the Georgiana Panthers 52-13 at Linden Athletic Field to advance to the Class 1A State Semifinals.

“Our plan was to do everything we’ve been doing all year and that’s what we’ll continue to do. We have to be who we are and do the things we have to do to help ourselves overall,” said Linden Head coach Andro Williams. “It comes down to us executing what we do each and every day.”

LHS (13-0) rolled to 338 yards of total offense with 306 coming on the ground while giving up 271 total yards to the Panthers (12-1), but forcing three critical turnovers in the victory.

Dequan Charleston had himself a night with five touchdowns with three coming on the ground, one receiving and the other being a punt return.

After a CJ Robinson interception, DeAntonio Williams scampered for an 8-yard score to put Linden up 7-0 coupled with an Isaiah Scott PAT in the opening minute of the game.

After going quiet for the rest of the first quarter, Linden scored again with 10:51 on the second quarter clock on a 15-yard run by Deauris Jones to take a 13-0 lead.

Then the senior playmaker Charleston broke loose for a 48-yard punt return as the Patriots took a 20-0 lead.

Robinson and Charleston connected on a 17-yard touchdown pass with 3:05 to put Linden up 26-0.

However, Georgiana did not go quietly into the night using several big plays on a drive capped by a 3-yard touchdown run by Cameron Longmire to bring the score to 26-6 in favor of the hosts heading into halftime.

After starting the drive with an interception, Charleston rumbled 54-yards to open the second half scoring and put Linden up 33-6 with 7:16 on the clock.

“It’s like I’ve said all week. They’re a dangerous football team. They have three or four guys that are breakaway guys that can make a big play at any time. That’s why they came in here undefeated,” said Williams.

Charleston registered touchdown number four on a 14-yard run to put the Patriots up 39-12 with 3:36 left in the third quarter.

Scott converted a 4th and 14 fake punt for a 40-yard touchdown with just seconds left in the third to extend the Linden lead to 45-14.

Charleston put the final touches on the victory in the early moments of the fourth quarter on a 16-yard run to seal the victory at 52-12.

Linden is set to host Maplesville in the fourth round of the Class 1A AHSAA playoffs. Maplesville claimed a 60-34 victory over Sweet Water on the road.