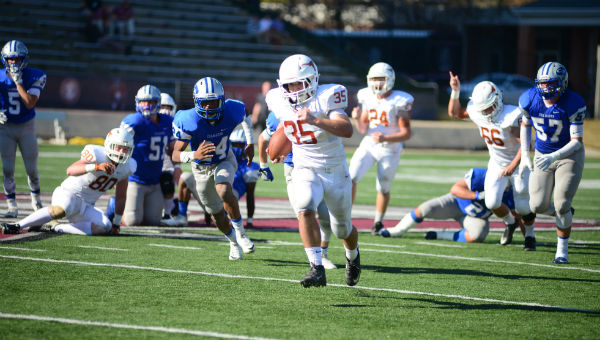 Weldon Aydelott scored three touchdowns in his final game for the Longhorns as Marengo Academy won its second AISA-A Championship in four years.

After falling behind two scores, the Marengo Academy Longhorns has to scratch and claw to fight back and when it was all said and done MA left Veterans Memorial Stadium in Troy with a 34-33 victory in the AISA-A Championship game over the Chambers Academy Rebels.

The win gave the Longhorns (11-1) their ninth title in school history.

“I’m just proud of our kids for the heart and determination that they showed,” said Marengo Academy Head coach Webb Tutt. “They had three one play drives. That usually demoralizes the kids, but they just kept fighting and kept coming back. I just can’t say enough about that great senior leadership and they deserve this for what they’ve gone through.”

Chambers (12-1) took the early lead off the legs of quarterback Malik Lyons who scored on the fourth play of the Rebels first two drives on runs of 52 yards and 51 yards respectively to give Chambers a 13-0 lead with just over 7 minutes in the quarter.

The Longhorns responded with a seven-play drive capped by a 1-yard run by Jacob Beck to close the gap at 13-7.

Jordan Gillespie put the Rebels up two scores once more with a 12-yard touchdown to cap the longest drive of the first half by Chambers to make the score 20-7.

Marengo Academy scored the final points of the first half when Jacob Beck found a wide-open Landon Houlditch for a 10-yard score to bring MA to a 20-14 halftime deficit.

The Longhorns took their first lead of the afternoon at 21-20 when Weldon Aydelott broke loose for a 49-yard with 9:32 on third quarter clock.

However, Chambers responded immediately 17 seconds later on a 67-yard run by Lyons.

It would take over 12 minutes of gameplay before anymore points were scored, but with 9:13 on the clock MA broke the silence by capping a 15-play, 72 –yard drive with a 1-yard run by Aydelott as the Longhorns regained a 28-27 advantage.

Chambers, searching for the first title in school history, did not go quietly and put together a long drive of its own culminating with a 4-yard Lyons score with 3:52 left in the game to regain a 33-28 lead.

“There was no panic on the sidelines. Even when they scored late we said we had time,” said Tutt. I’d like to run the clock a little bit more, but I didn’t want to take points off the board.”

Marengo Academy then started the championship winning drive that ended with 1:17 on the game clock when Aydelott crossed the goal line on a 7-yard run setup by a huge catch on 4th and 9 by Robert Tutt and then Tutt found Gavin Tate on a reverse pass to put the Longhorns in the redzone.

Aydelott has another huge day running the ball carrying the rock 28 times for 218 yards and three touchdowns.

As a whole, the Longhorns put up 372 yards of total offense with 278 yards coming in the tried and true ground game.

Tate led the defense with seven tackles including a sack. The Longhorn defense tallied 8 sacks during the contest.

Coach Tutt pointed to the experience that the team had playing in the fourth consecutive trip to Troy to help overcome the late game adversity.

“The game itself was not overwhelming to them,” said Tutt. “Everyone knew what stage we were on and they responded to everything we asked them to do.”

Then ended a run for a senior class that lost five games in four years and the teams the Longhorns lost to only had two losses between them according to Tutt.

“They’ve set a precedent for other teams and kids to come through,” said Tutt.